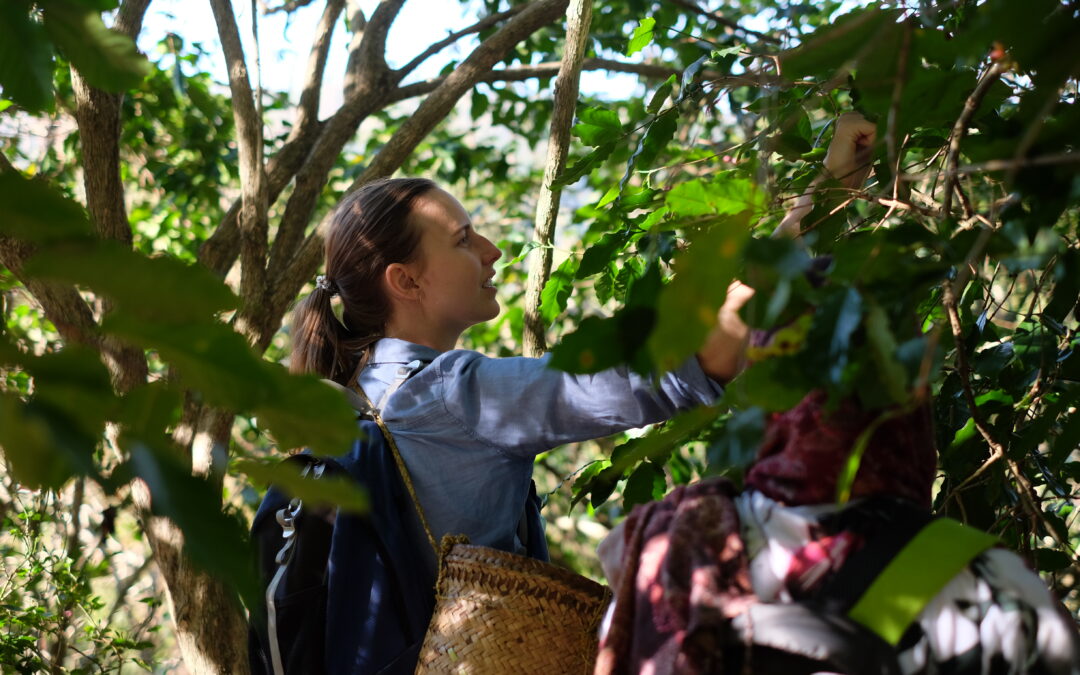 Feature image: Chelsea picking coffee beans in Railaco, Timor Leste during her time volunteering as a mentor on a Humanitarian Design Summit trip in July 2018.

Nurse. Farmer. Social worker. Athlete. Biomedical scientist. These were just some of the many careers that Chelsea Hayward dreamt of when she was younger. It wasn’t until Chelsea realised her passion for problem-solving and helping others that she decided on pursuing a career in engineering. She saw the value in its capacity for helping not just one person but entire communities with a single solution.

Now working as a water engineer with Jacobs, Chelsea highlights how engineering is deeply embedded within the infrastructure of our society. It is engineering that facilitates much of the provisions that are taken for granted. As she works to tackle the water crisis in Sydney, it is part of her job to ensure that the people of Sydney can turn their taps on and have access to clean water. It becomes obvious that engineering isn’t only working with abstract concepts but instead is an integral part of day-to-day life.

Where did she begin?

In 2011, Chelsea began studying Chemical and Environmental Engineering at The University of Queensland. Her studies not only taught her the technical skills and knowledge required of an engineer, but also opened the door to a number of rewarding opportunities that allowed her to see just how much of a positive impact she can make.

During her first year at university, she took part in the EWB Challenge where she worked on a project to develop a water purification system for a rural community in India. The project cemented Chelsea’s belief that engineering can be utilised to improve the lives of those who are disadvantaged. Vastly inspired by this experience, she was prompted to take up a volunteer role with EWB.

While still at university, Chelsea ran numerous EWB Youth Outreach workshops for primary and high school students. This program inspires younger generations to consider a career in engineering and related STEM positions, with a particular focus on supporting female and First Nations people. Embracing diversity is high on the priority list for Chelsea. She recognises that in order for solutions to be suitable for all, the voices of people from a range of backgrounds are needed.

“Engineers are at the forefront of shaping our world, we create solutions for a better way of life for our communities. So it makes sense that engineers should be as diverse as the communities they are creating solutions for.”

Reflecting on her own high school experience, she noticed how females weren’t often encouraged to explore a career in STEM. She knew that being a female in a male dominated field could offer inspiration to young girls thinking of pursuing engineering. In her own work, she recognises how impactful it can be to see yourself represented in a field that you want to excel in.

“I’m really lucky to have a reporting line of mostly women above me and I hope that this is something that becomes more common in the engineering industry. It makes it so much easier to be able to see myself in those leadership roles in the future, when there are other women to look up to.”

Chelsea acknowledges how her role in the Youth Outreach workshops is influential in the way that it allows young girls to see themselves being actively represented in engineering. Bringing it full circle, Chelsea returned to her high school recently to conduct a workshop, empowering girls to feel motivated and have the female inspiration that was lacking in her own schooling.

Chelsea became increasingly engaged with the Youth Outreach program and broadened her scope to the Regioneering program in her final year of university. This initiative aims to introduce students in remote areas to careers in engineering. Chelsea was actively engaged in this and being a principle organiser, has spent weeks on the road visiting numerous schools across South-west Queensland, Northern Queensland and the Torres Strait Islands.

In the town of Roma, there was one moment that struck Chelsea when mid-workshop a young girl called out, “Ugh engineering, I would never do that”. However, by the end of the workshop it was a different story: “My dad is going to faint when I get home, because I’m going to tell him that I want to study engineering!” she said. This is exactly why Chelsea does what she does. 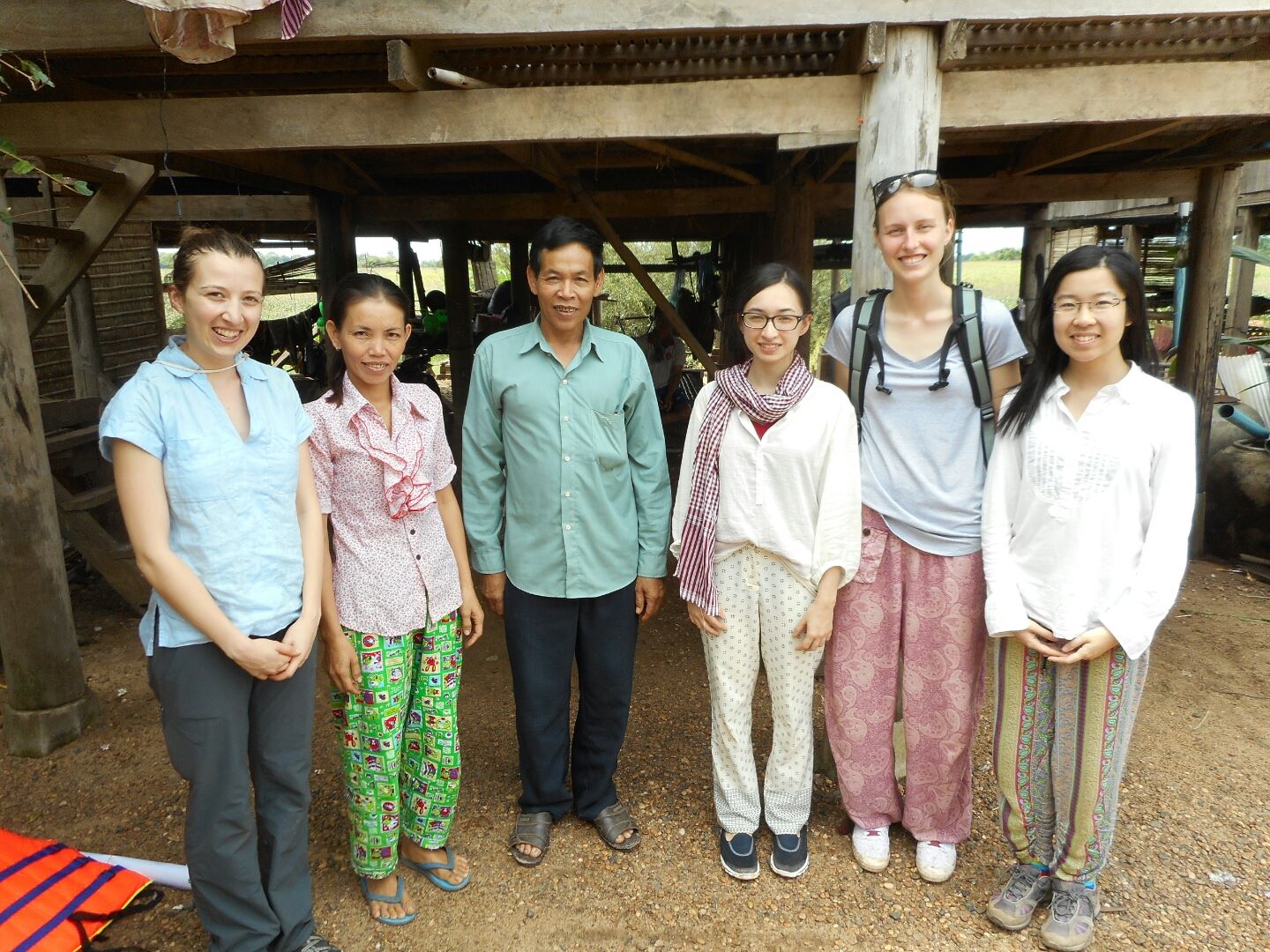 During her final year of university, Chelsea travelled to Cambodia for a two week Humanitarian Design Summit study tour with EWB. This program focuses on human centred design, with a particular emphasis on learning from and designing for communities. This two week trip allowed Chelsea to gain exposure to the ways in which engineering can positively impact and uplift the lives of others.

Throughout the first week, Chelsea was immersed within the culture and people of Cambodia. Learning through workshops, she began to form an understanding about what the day-to-day activities of the locals entail. In a group challenge she was tasked to find a Tuk-tuk driver and discuss with them possible improvements to their vehicle. The driver they spoke with had completely embellished his tuk-tuk, adding fake grass and cool floral designs. She recalled that her group got a little sidetracked throughout this challenge as they chatted and got to know the driver and his family.

For a few nights, Chelsea lived with a family located along the Mekong River, experiencing first-hand the daily life of rural Cambodians. Chelsea and her group were also asked to problem-solve, through exploring a solution to prevent the erosion of the island. After collating research, they proposed that a cluster of native flora should be planted in a specific manner to add support and impede water erosion.

The EWB Humanitarian Design Summit gave Chelsea direct, immediate and valuable skills within a diverse learning environment, where she was able to apply her knowledge in a real world setting. 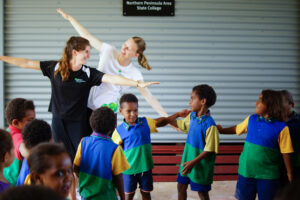 Chelsea delivering a Youth Outreach workshop to the Northern Peninsula Area College – Injinoo Junior in Far North Queensland on a regioneering trip in 2016.

Chelsea started as a student volunteer with EWB when she was freshly out of high school. Her ability of making the most and never shying away from an opportunity, as well as having a deep passion to inspire those around her, enabled her to progress and become the EWB National Outreach Coordinator, which she has held for the last two years. In this role, she develops resources and empowers children, teenagers and young adults to explore how human-centred design can contribute to positive social impacts, and expands their perspectives on the world to more empathetically strive for a better future.

Chelsea stresses that although engineers are characteristically technical people, in order to see the change and diversity in the industry, they need to become better storytellers to allow people to better understand and appreciate the importance that engineering plays in daily life. Chelsea implements this way of thinking into her personal and professional approach, with the hopes to inspire the next generation of engineers.

About the ‘Futur-neers’ program: This series is funded by the Australian Government Department of Industry, Science, Energy and Resources through the ‘Women in STEM and Entrepreneurship’ grant program. The program focuses on deeper support and amplification of EWB’south Outreach volunteer network, with a particular focus on empowering women in engineering.