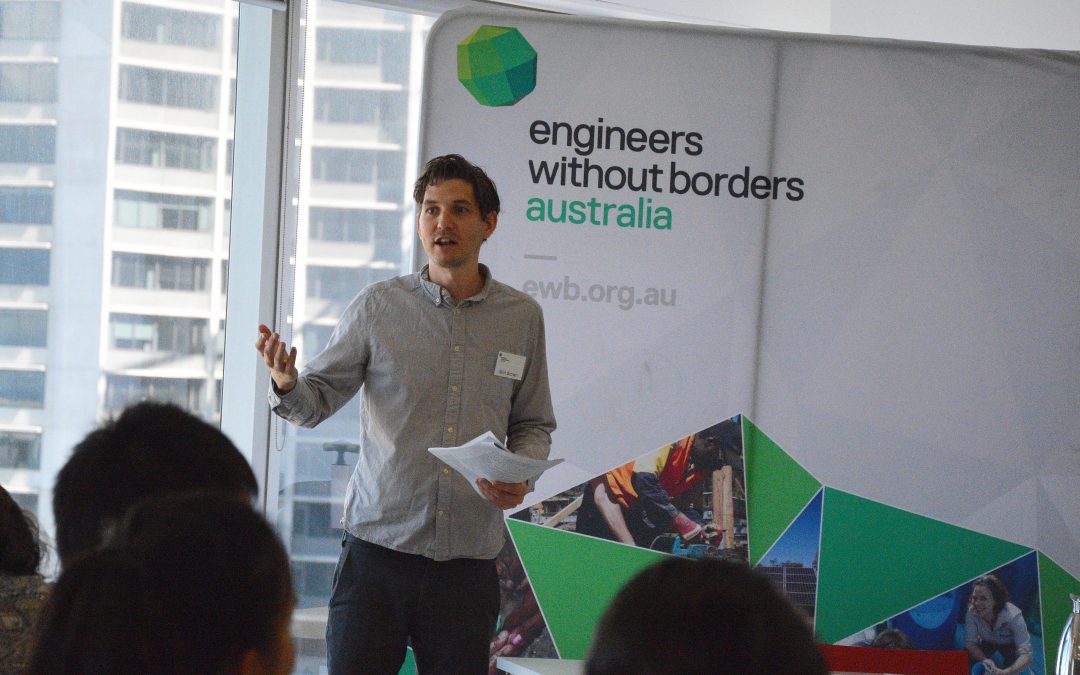 Sam Johnson, overlooking the glittering South Pacific Ocean, is reflecting on how he came to be in Tonga working for the World Bank as a transport consultant, having only just graduated a year earlier from University of New South Wales (UNSW) in Civil Engineering. With a role supporting Pacific Island Governments in the delivery of maritime, aviation, and road infrastructure projects, this is not the kind of role that just any graduate can apply for. But then Sam isn’t just any kind of graduate – he’s a graduate with humanitarian development experience and community centred design skills. A graduate of the EWB eco-system; moving from chapter volunteer roles to a final year thesis with EWB’s University Research Program.

“The whole reason why I studied Engineering is because I am interested in how infrastructure underpins stable prosperous societies. It sounds so grandiose!” laughs Sam “But I was always trying to see how I could use engineering to work on some of these big challenges we have in the world, like poverty.” Having joined the EWB chapter at UNSW, Sam found himself amongst likeminded people with a shared vision for how engineering can be used for social good. “There is so much energy in the universities for this. Graduates now expect that their work is going to be closely tied to social benefit, and EWB has played a big role in putting that on their agenda.”

When it came to choosing his final year research thesis, Sam felt the choice was obvious. “EWB’s University Research Program is the only humanitarian engineering research program of its kind in Australia, maybe in the whole Asia Pacific,” he explains “For students in civil engineering they might be looking at the prospect of researching how much cement there is in a particular concrete blend – not something people get too excited about,” he says laughing “but with the EWB research program so many students look at that and think ‘Wow! I can have real impact with my thesis!”

For eleven years through EWB’s University Research Program, final year students across Australia have investigated the application of new ideas to real world issues such as disability access, energy and food production. In 2016/2017, 42 research projects were completed; this involved 53 student researchers – over 55% of whom are female – supervised by 35 academics at 12 universities for 11 community partner organisations.  In the same period, 42 new research projects for 6 community partner organisations commenced, involving by 61 student researchers supervised by 34 academics across 13 universities.

With community development organisations partnering closely throughout the process, students only work on technologies and applications relevant to community needs. But why work with young people not yet qualified as engineers?

“Communities generally are short on time and engineering knowledge,” explains Nick Brown who runs the EWB Research Program. “They also have limited access to resources, and they certainly don’t have the kind of facilities that universities make available to students. Crucially though it these young people who often bring the fresh perspective needed to rethink solutions for communities long underserved by the traditional engineering sector.”

Sam agrees, “The culture that EWB brings to its research program makes it a hub for innovative ideas, and thinking about things differently both inside and outside of Australia,” says Sam “And its popularity is growing really rapidly.” Sam himself undertook a thesis that didn’t actually have a lot of engineering in it. He chose to research business models for social enterprises serving Base of Pyramid (BoP) markets, specifically with a focus on the EWB social enterprise ATEC* which markets flood and earthquake proof biodigestors, helping poorer communities meet their energy and sanitation needs.

“I had a rough understanding of social enterprise at the time, so I was really interested in learning more about this space so I could have a solid foundation in it before I graduated. Also I really wanted to work on the ATEC* project because I was so excited by the technology.” Pairing the research approach with the community approach is something EWB is well practised in, using it as a way to generate and iterate innovative and appropriate technologies. Nonetheless Sam’s research looked at scaling appropriate technology that was already in place.

“I did a huge literature review looking at the business strategies of the most successful social enterprises. I broke down their approaches into parts and picked the takeaways I thought would be useful for Atec*. One of the main findings is the importance of a strong aftersales service, because one of the real failings of development aid is when there is no thought for how a technology will be maintained after it is installed.”

For his efforts, Sam was awarded the Best Presentation, and the Entrepreneurship Award​ at the Research Symposium 2016, part of the EWB Making an Impact Summit.  Furthermore having read the research, Ben Jeffreys CEO of ATEC* invited Sam to spend two months in Cambodia with the ATEC* team to do further field research on the changes the social enterprise could make to its after sales service. Sam reflects that this was an incredibly valuable experience that complimented his engineering training. “When you get out in the real world engineers are working with business people, so you have got to have a good business mind set,” he says “So this experience was really useful for that, and for getting an understanding of working in developing countries – so incredibly formative for where I am at now.”

Through working in Cambodia, Sam came to understand that there is a big difference between what you read about social enterprises and how they actually run on the ground. Sam thinks that the research he did in Cambodia on aftersales service is useful “because there is a real gap in understanding right now.” A highlight for Sam though was how his own research could add real value to a real enterprise. He shared his findings with Ben and they have been incorporated into how ATEC* runs its business. “To see that the ATEC* CEO has my key summary notes above his desk as a reference is very satisfying,” He smiles.

Building on this experience, the last 12 months led him to short placements with Pollinate Energy in India and with UNESCAP, before securing his current role with The World Bank. As he plans his next working trip to Vanuatu, Sam reflects on the decision that led him from university to international development, and to the career he has always wanted. “EWB was what made me eligible to apply for this kind of job so young. It gave me that grounding in Humanitarian Engineering and community led design, and exposed me to what it is like working in developing countries. The World Bank were impressed, and excited that I clearly had a strong passion for working in this space.” And even as he helps to redefine engineering beyond traditional bounds he still hasn’t lost his perspective. “Right now I want to get the hang of the job I have,” he says laughing ‘I’m the young guy on the team!”