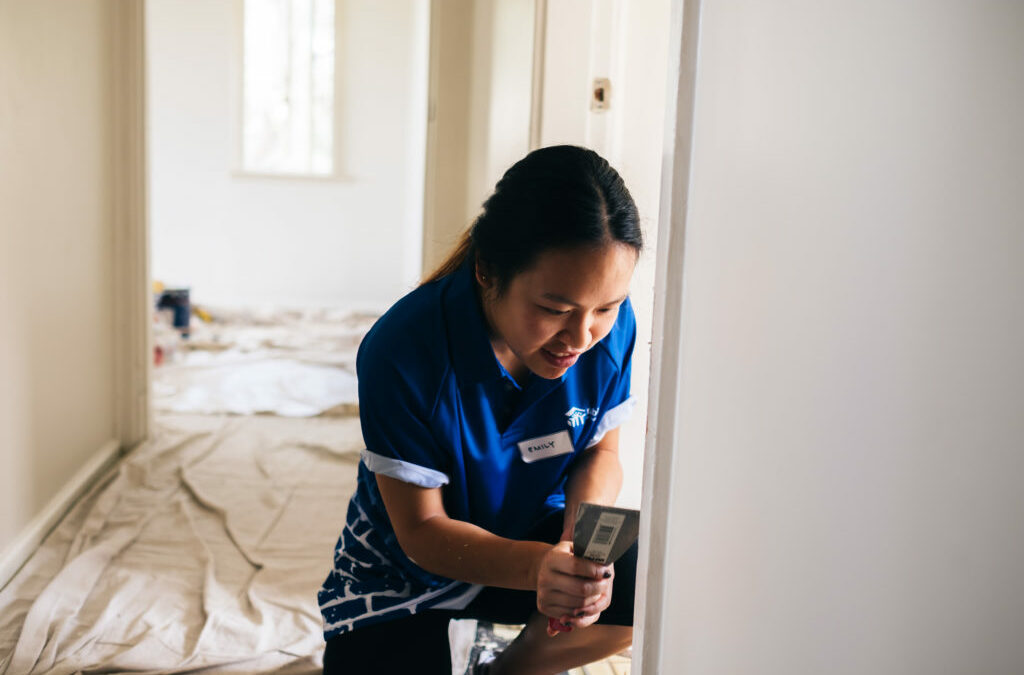 Feature image: Emily renovating women’s crisis accommodation with Habitat for Humanity as a volunteer in 2018.

“I’m quite motivated by doing things other people don’t. Being one of the only female students in my engineering classes didn’t bother me. I proved that I could be there.”

Long-term EWB Chapter volunteer Emily Chung has never been one to stick to the status quo. Back in 2011 when she applied to study a double degree in Civil Engineering and Architecture, it never worried her that choosing a career in two male-dominated industries may come with challenges.

Not only did Emily graduate from The University of Sydney in 2016 with flying colours, but she was also later awarded 2021 Female Engineer of the Year by the Association of Consulting Structural Engineers NSW in recognition of her involvement in unique and technically challenging projects, and impressive volunteer career with organisations such as EWB Australia. 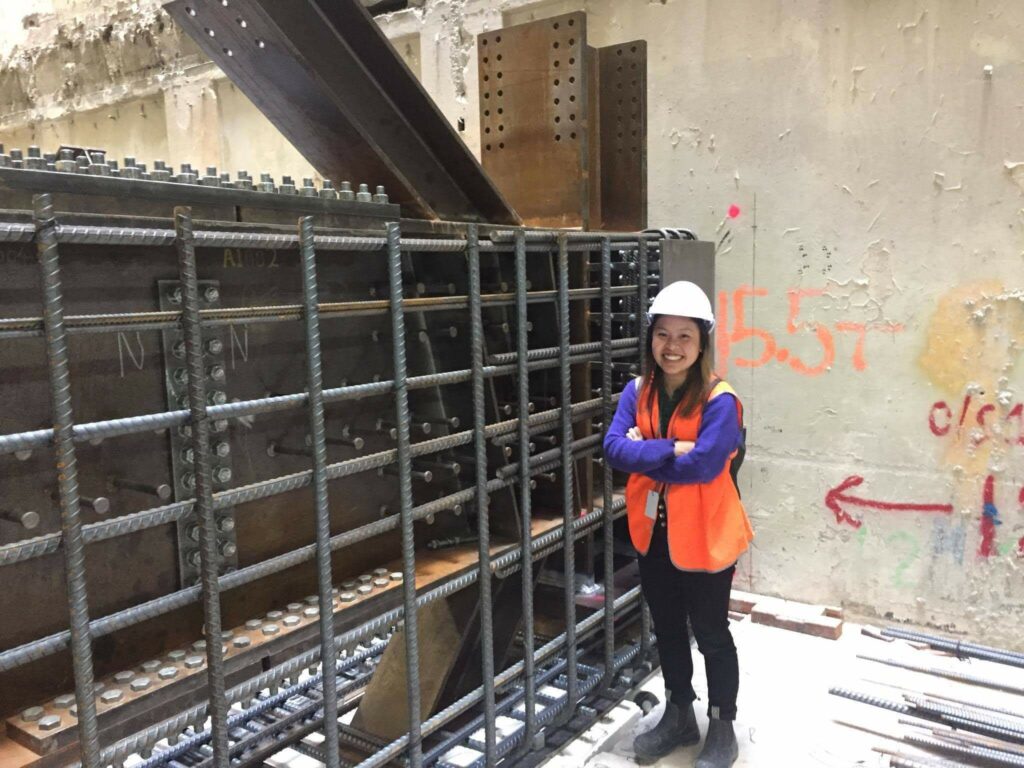 Emily on-site at Wynyard Place in her role as a structural engineer in 2017.

First Taste of Being a Socio-Technical Engineer

Emily first came across EWB Australia in her second year of university when she took the EWB Challenge, a curriculum-integrated project-based learning opportunity for undergraduate engineering students. In a group, Emily’s team designed a modular, early learning centre for a village in Timor Leste. It was through the EWB Challenge that she first saw how human centred design can have a transformative influence on not only individual lives but society as a whole.

“After doing the EWB Challenge, that’s when I really saw how engineers can have an impact and how technical skills can be used in a beneficial way.”

A year later after taking part in the EWB Challenge, Emily joined her local EWB Chapter. Inspired by EWB’s vision of a world where technology benefits all, Emily was excited by the opportunity to volunteer her time with an organisation that aligned with her values and aspirations.

Emily later became Co-President of the University of Sydney Chapter in 2014, where she helped organise EWB’s second ever Regioneering trip. Alongside her fellow Chapter volunteers, Emily visited 14 high schools over 3 days in Central-West NSW. During these visits, it became clear to Emily that engineering wasn’t well known or understood as a potential career option for many of the students at these schools. Through the Youth Outreach workshops, Emily not only introduced the students to the possibility of being an engineer, but also showed them how engineering has the capacity to improve the lives of others.

After graduating from the University of Sydney Chapter, Emily started volunteering as the Local Partnerships Coordinator with the NSW Chapter. In this role, Emily helped formalise partnerships and develop programs, such as the successful employment support program for migrant and refugee engineers in partnership with Metro Assist.

Emily ended up volunteering with EWB for a total of 7 years, where she was able to take her learnings from this period and use them in her professional life. Emily found this experience extremely rewarding. She was able to advocate for the social and environmental issues that matter to her while simultaneously inspiring the next generation to be part of the solution to these problems. 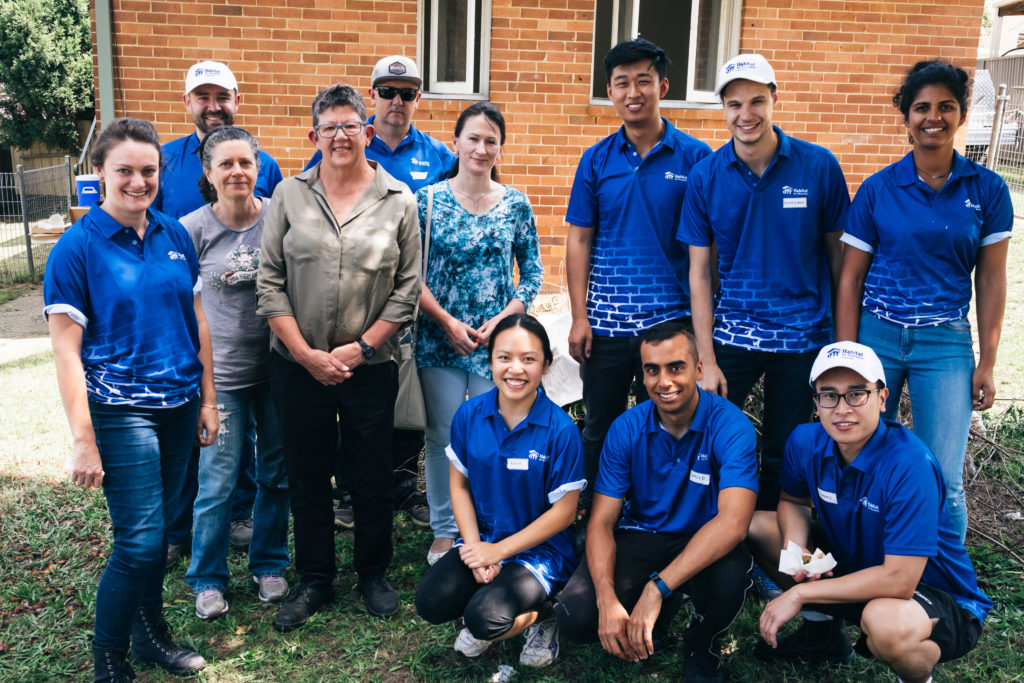 Emily volunteering with Habitat for Humanity alongside her colleagues at TTW in 2018.

Whilst continuing to volunteer her time with EWB, Emily began working as an intern with structural engineering consultancy firm, Taylor Thomson Whitting (TTW) in 2015. Soon after joining TTW, Emily noticed the firm didn’t have any community based programs for employees to take part in. Drawing upon her vast volunteer experience with EWB, Emily took it upon herself to create a community based initiative. And with that, The Community Engagement Group was formed!

Through this initiative, Emily created ongoing impactful opportunities for TTW staff to participate in helping the community and creating inclusive and meaningful activities for all. Some of the rewarding volunteering initiatives Emily led staff to participate in included assisting with renovating women’s crisis accommodation with Habitat for Humanity, cooking meals for people in need with Our Big Kitchen, and helping remove rubbish from the Sydney Harbour through the Sydney Clean Up Kayak program.

The Community Engagement Group initiative not only enabled Emily to continue her passion for volunteering, but also inspire her colleagues and drive cultural change within the organisation.

From all this, it isn’t hard to see why Emily won the ACSE Female Engineer of the Year award in 2021. The award is given each year to a leading female engineer who is a role model for other women in engineering. Emily acknowledges that it was because of her previous volunteer experience that she was able to contribute to TTW in a meaningful way.

“Make sure that you take advantage of all opportunities because you never know where they might lead.”

Every opportunity has the potential to open new doors; Emily is proof of that.

About the ‘Futur-neers’ program: This series is funded by the Australian Government Department of Industry, Science, Energy and Resources through the ‘Women in STEM and Entrepreneurship’ grant program. The program focuses on deeper support and amplification of EWB’south Outreach volunteer network, with a particular focus on empowering women in engineering.

To read about our other incredible ‘Futur-neer’ role models in the EWB Chapter network, click here.