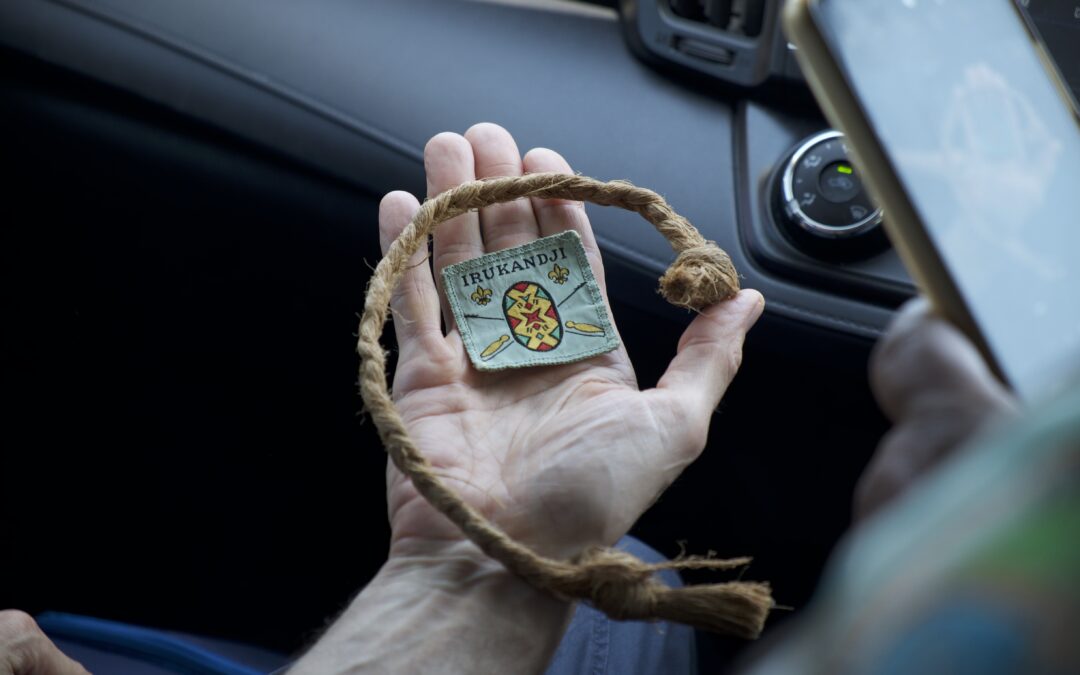 Pictured: EWB Chair Gavin Blakey’s Irukandji district badge from his time as a Cub and Scout in Cairns.

Each year, EWB Australia partners with universities and a different community-based organisation to develop and deliver the EWB Challenge. First-year university students participating in the EWB Challenge are presented with the opportunity to design creative solutions to real-world, community-identified projects.

In September 2021, the EWB Challenge team and EWB Chair, Gavin Blakey, travelled to Cairns to visit Dawul Wuru for a scoping trip. Gavin reflects on his time spent on Yirrganydji Country.

Sometimes life takes some unexpected turns. I was born and raised in Cairns but now live in Brisbane. On a recent trip to visit family in North Queensland, I dropped in on EWB staff Grace Roberts and George Goddard who were on their first scoping trip for the 2022 EWB Challenge.

Before departing Brisbane, George mentioned that he and Grace would be doing a site inspection with Brian Singleton, Senior Ranger of the Yirrganydji Land and Sea Rangers and Board Director at CfAT. When I saw the word Yirrganydji, it sounded a lot like Irukandji. I remembered that when I was a Cub and Scout in Cairns, we were part of the Irukandji Scout District. I looked in my cupboard and lo and behold, nearly 50 years later I still had my Irukandji district badge from my Scout uniform!

Badge in hand, I went to visit Grace, George and Brian who took us to an area of Yirrganydji-managed land at the mouth of the Barron River on the northern outskirts of Cairns, called Dungurra. It turns out that the Irukandji badge is being used as evidence in a recent native title claim to demonstrate that the area was known to be Yirrganydji (Irukandji) land in and around Cairns. Brian was very pleased to see a badge in-person as he and many of his colleagues had only seen photos of such a badge. I gave the badge to Brian in case it could be useful to him. 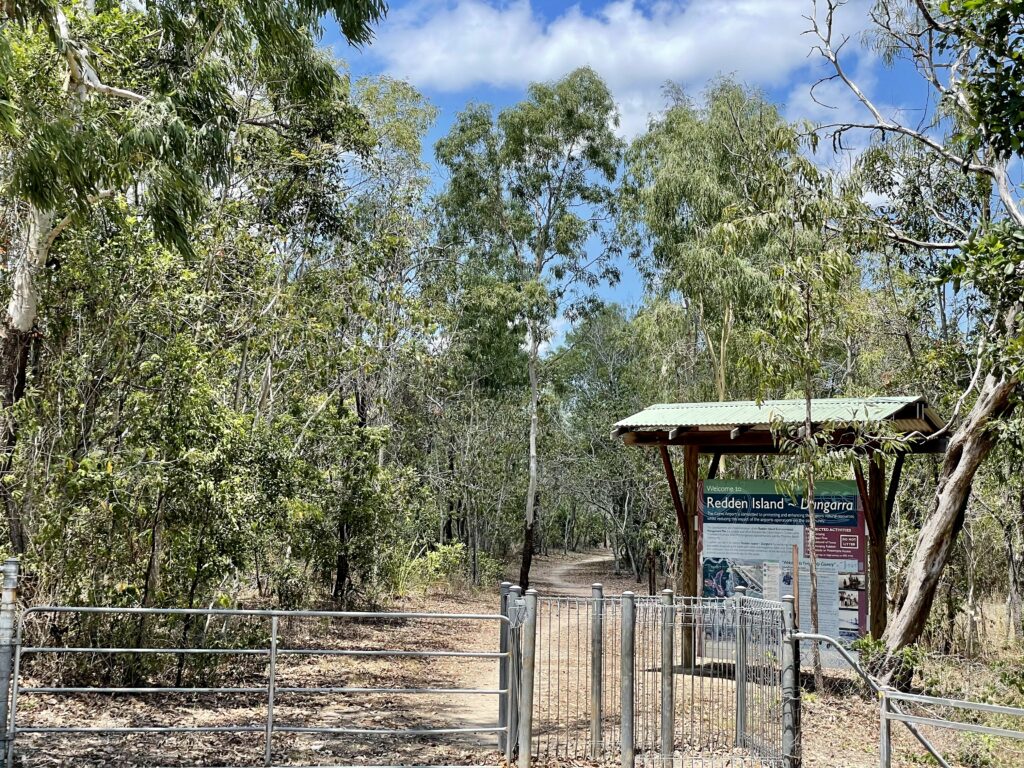 Brian showed Grace, George and I around the land that he and his Yirrganydji Land and Sea Rangers manage on behalf of the Cairns Airport Authority at the mouth of the Barron River. During our visit, Brian pointed up to the hills and explained the creation story of Damarri. Damarri was a warrior and creator of the land and sea. He taught his people to respect the Kunyarra (crocodile), because Kunyarra the crocodile had bitten his leg and he had laid to rest on the nearby hill. I’ve been looking at that ridge pretty much most of my life but I’d never known this story. Now when I look at that ridge, I see it in a completely different light and remember the lesson of respecting Kunyarra, the crocodiles.

The Yirrganydji Bama are coastal seafaring rainforest people, whose country runs from Cairns to Port Douglas. Their country will be the focus for the 2022 EWB Challenge. One site the students will be looking at closely is Dungurra, where we visited. Dungurra is bounded on one side by the ocean, on another by the Barron River, on another by the estuarine mangroves and on the other side by a tidal creek. The land is sacred to the Yirrganydji people and provides a wonderful opportunity for Aboriginal people to spend time on Country and to teach us how to care for and manage the land.

Dawul Wuru aspire to have a ranger base on Country to improve how they manage their traditional land as well as serving as a meeting place for the Yirrganydiji community. Students taking part in the 2022 EWB Challenge will be exploring this in their projects. From an engineering perspective, these projects have many elements to consider. The designs need to be sensitive to the cultural heritage of the land, the buildings need to be designed to fulfil their function as a gathering space for local and visiting Aboriginal people, and it’ll be an educational facility for cultural and environmental purposes. The site is subject to flooding from the river and the ocean, and vulnerable to the impact of cyclones. Working closely with Brian and the Yirrganydji Land and Sea Rangers to take into account important considerations such as these will be key for the EWB team as they develop the design brief for students to work on during their semesters in 2022. 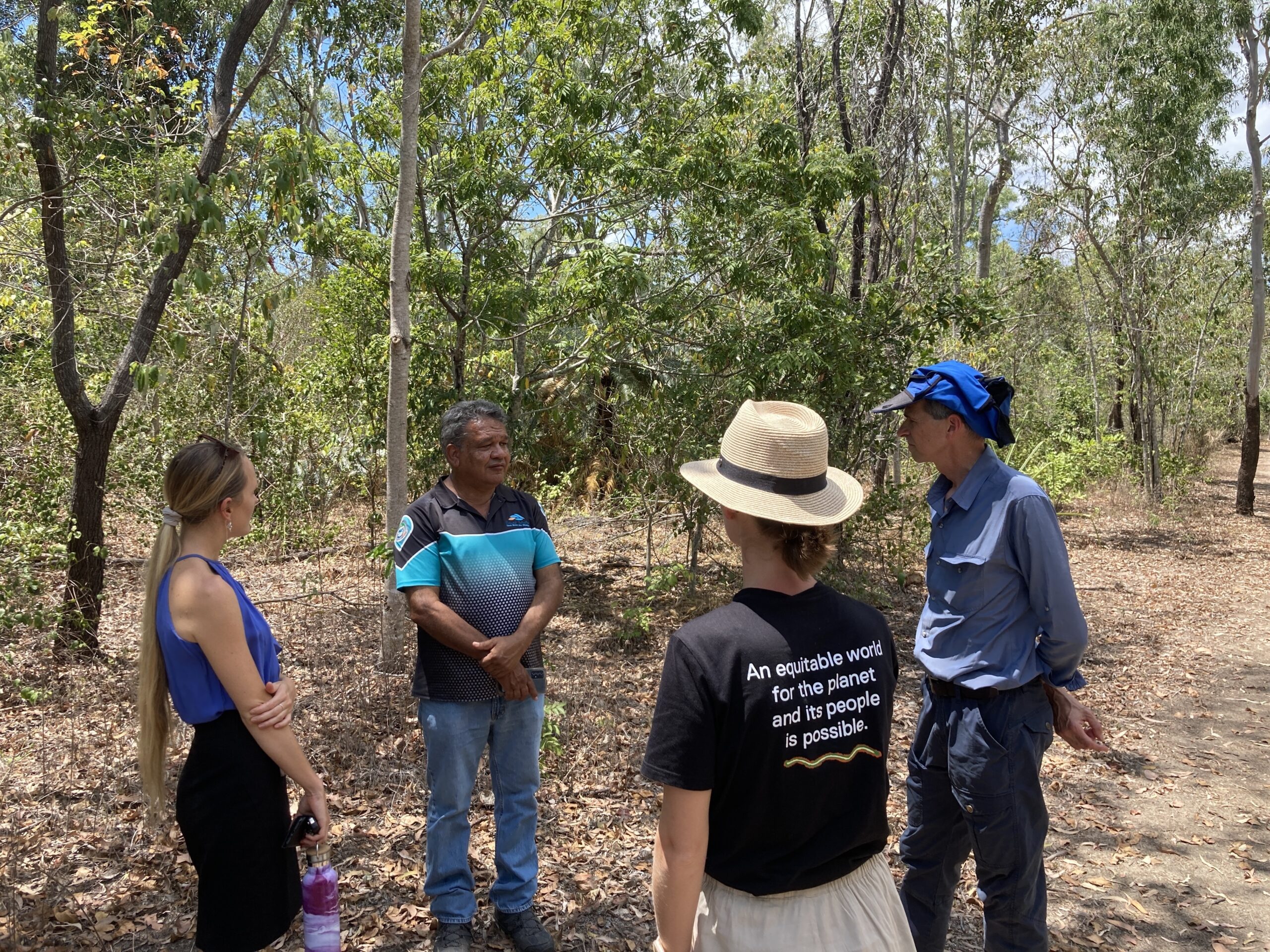 My experience of being on-site and being shown around by Brian was profound. He has a deep sense of knowing and respect for the land and a strong desire to bring people together to have a deeper understanding of culture, land and environment. Their aspirations for a community hub and ranger base at this location will provide for that intersection and is an investment in the future.

Back here in Brisbane, my wife Bea and I have been learning about Aboriginal history in Brisbane in general and our neighbourhood in particular. We’ve discovered that our street Corona Avenue (yes I know, that’s an easy name to remember!) was a tree burial site for the local Aboriginal clan. Enoggera Creek where my neighbours and I enjoy our weekly weeding and rehabilitation of the vegetation adjacent the waterway was a favourite fishing and camping spot for Aboriginal families. It was called Bayuba and was known far and wide for its abundant supply of fish. Each year, hundreds of Aboriginal people would congregate in the vicinity of Bayuba’s waterholes for corroborees, ceremonies and other celebrations.

So no matter where we are in Australia, whether it’s in Cairns, remote Western Australia or in the city like Sydney, Melbourne or Brisbane, there are Aboriginal people who have cared for and managed the land for thousands of years. There’s much for us to learn from them.

Gavin Blakey OAM is the Chair of the EWB Board. Gavin brings to EWB his experience as a board member for seven years for an international not-for-profit organisation representing 200,000 members in 100 countries.