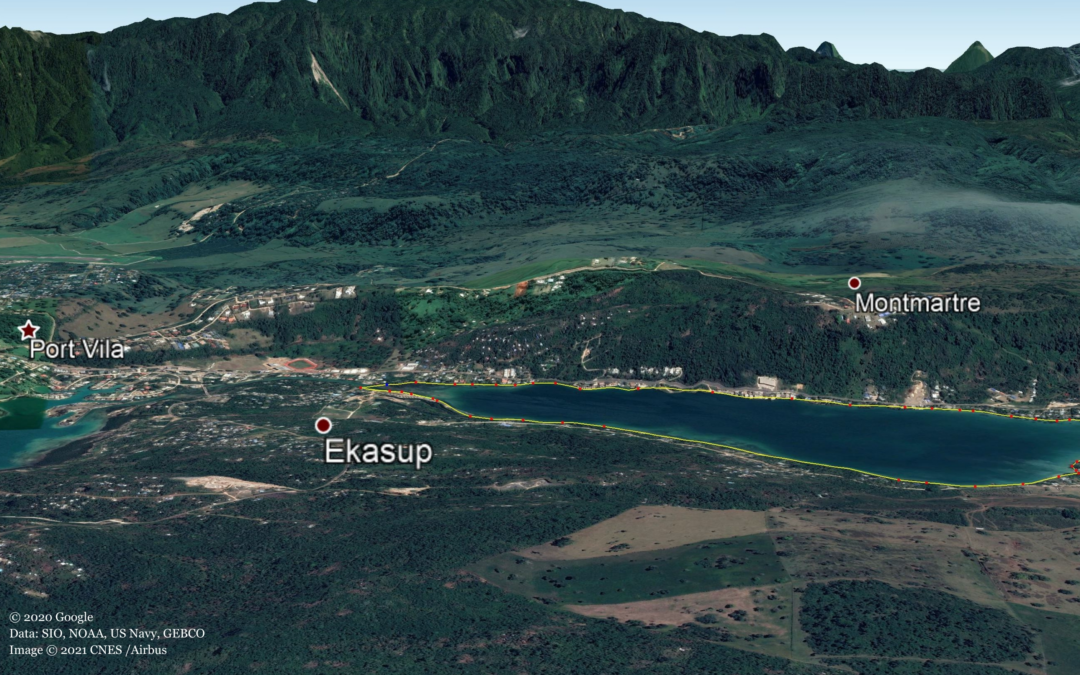 Emten Lagoon is a picturesque and important part of Vanuatu’s Efate Island, with the several communities that reside nearby relying on it for livelihood and lifestyle. But locals have had growing concerns about the lagoon’s pollution levels, in part due to sewage discharge into the water. Those concerns were justified when an analysis of the water quality found microbiological indicators that exceeded quality limits for coastal water.

The Erakor Bridge Community is situated on the edge of the lagoon and consists of low-lying areas with high groundwater. In some areas, the water table is less than half a metre from the ground surface, leaving residents prone to frequent flooding events. These environmental factors mean standard sanitation systems aren’t appropriate and good sanitation is harder to access.

As part of EWB’s commitment to sanitation in challenging environments, our team based in Vanuatu has been working with the Erakor Bridge Community and Vanuatu’s Ministry of Health (MoH). Together, they are working to develop onsite wastewater treatment systems that are appropriate for the local environment.

With a ban on fishing in place and concerns around the safety of swimming in Emten Lagoon, it’s hoped a sanitation solution will lead to better livelihoods and health outcomes for the local communities.

The EWB team on the ground in Vanuatu is using EWB’s Technology Development Approach (TDA) to provide a platform for an effective and community-led solution. The TDA is an integrated version of Human Centred Design which includes consulting with the local community, as well as considering environmental factors and the long term sustainability of technologies. It will allow the team in Vanuatu to develop a sustainable and tailored solution that will be owned and led by either community groups or local businesses.

At the start of 2021, the EWB team conducted an awareness program around Emten Lagoon’s pollution levels, transmission routes for contamination, and existing sanitation guidelines. Focus groups were run to canvas community input, ensuring the inclusion of vulnerable groups in the prototype development process.

Progress through collaboration and partnerships

Having captured community preferences, EWB is now in the process of reviewing the Project Requirement Document (PDR). Once the PDR is complete, a list of concepts will be finalised and presented to the community through another round of focus group discussions. These consultations provide the opportunity to find the community’s preferred solution.

With one prototype being developed for use in a community hall,  plans will also be created for ongoing community monitoring and maintenance. Another prototype will be built for home use, which families will be able to maintain themselves.

EWB is partnering with Field Ready for the design and prototyping process, who will provide support and workshop space for the upcoming prototype development phase. The prototyping phase is expected to be completed by the end of August.

Through partnership with the MoH, the project also provides the opportunity to incorporate the knowledge gained through the project into Vanuatu’s WASH National Guidelines.

EWB is able to continue to work on important projects such as this during the pandemic due to our investment in skilled local staff.