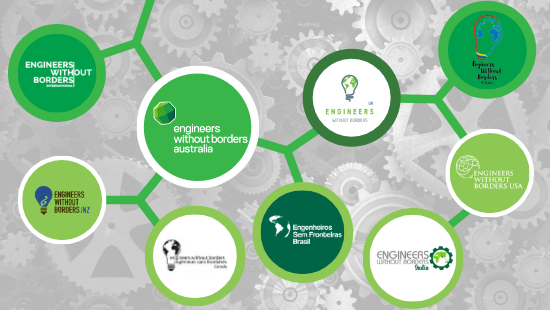 Engineers Without Borders Australia is part of an EWB worldwide fraternity of like-minded for-purpose organisations. Each EWB is its own entity with its own specific goals, methods and structures. As different as each organisation is, we all share a common belief: human-centred engineering is a vital part of any possible sustainable future. EWB Australia’s CEO Eleanor Loudon sits on the board of EWB-International, which connects and provides resources to its EWB worldwide member associations. We also intersect, engage and collaborate with our international family. Here are just some of the initiatives currently in progress.

EWB Australia and the Engineering Change Lab – a key initiative of EWB Canada – are aligned in recognition that the sector needs a mindset shift if we have any chance of delivering on goals for sustainable development.

Technology development and use are accelerating at an exponential pace. Many in the engineering community (including computer and data scientists along with other technologists) have recognised the urgent need to change its somewhat arm’s length approach to engaging with the consequences of technology innovation. This requires earlier and more direct collaboration with social scientists and policy-makers, including them in the development process rather than treating them as custodians to sort out societal, environmental, and other impacts that follow the design and development phase.

A new initiative – the Engineering Technological Stewardship (ETS) project – aims to address this grand challenge by catalyzing a transformation in the culture of engineering and technology toward fostering awareness of, promoting engagement with, and taking responsibility for the complex societal, environmental, and ethical impacts of technology – that is, by cultivating a mindset, set of principles, and set of behaviours that have been termed ‘technological stewardship’.

It is a project that is ambitious in its scale and unprecedented in its level of international coordination. It brings together key changemakers inside and outside educational institutions as a transformational catalyst for broad, pervasive and sustainable change. Researchers from over 14 universities across the globe – including EWB University Partner Monash University – as well as collaborators from engineering, humanities and social sciences academia, civil society, industry and professional bodies and involved in a piece of work which seeks to apply a sophisticated focus on educational culture change.

EWB Australia was sought to take an advisory role in the Technological Stewardship (TS) Leadership Group, which will inform the co-production of knowledge around technological stewardship. The TS Leaders will ensure that the research conducted as part of the grant is relevant to the broader tech sector and that it reaches the wide, multi-sector audience that we are targeting as a necessary part of achieving transformation.

We look forward to sharing the outcomes of this critical project.

Any changes to these benchmarks will filter down from the international level into national-level frameworks, such as the Engineers Australia Stage 1 and 2 competencies.

The proposed changes as they stand represent an encouraging step forward. They contain an explicit recognition of the roles of engineers in achieving the UN Sustainable Development Goals as well as a need for engineers to ensure the processes and outcomes of their work are genuinely inclusive.

Through these proposed changes, WFEO and IEA have chosen to elevate a number of skills that EWB has been seeking to support through our education and training programs for over a decade, with skills such as critical enquiry, empathy, and collaboration increasingly recognised as core engineering skills needed at the highest level.

This process has also enabled EWB Australia to engage with EWB affiliates across the globe, including EWB Brazil, EWB India, EWB Philippines, EWB Canada and EWB USA, as we guide an aligned submission based on agreed feedback. In doing so we’re starting to build a network of organisations promoting the skills and mindsets required for technology stewardship.

Partnering for the Pacific with EWB New Zealand

Our work in Vanuatu is delivered through an ongoing peer partnership with EWB New Zealand, which commenced over ten years ago.

EWB Australia and EWB NZ work together strategically – coordinating initiatives jointly as well as alongside each other – across a range of engineering projects and education programs, supported through funding from both the Australian government and the New Zealand government.

EWBA supported EWBNZ during the close-out of the Rainwater Harvesting (RWH) System project, in Wawan communities on Ambrym island, in Wawan communities, which had the aim to develop a disaster and climate change resilient technology in this rural area. The project led to the construction of two 50m2 standalone rainwater harvesting shelters, as well as making improvements to rainwater harvesting systems in 11 villages. EWBNZ had been working in the North East Ambrym, Vanuatu for about three years with the Wawan Council to improve water supply, working in collaboration with the Department of Water Resources at the National and Provincial levels. EWBA and EWBNZ jointly carried a final site visit to complete the construction of the RWH structures, which required some additional structural engineering components and a distribution pipeline to several tap stands to serve three different villages to be implemented.

Another key focus of the partnership is to develop a diverse, skilled and accountable group of engineers, in which EWB NZ takes the lead. Strengthening the network of engineers, particularly for women, is planned through a range of education and training initiatives, including an online graduate’s course, training of EWBs ‘Technology Development Approach’ based with principles, and technical knowledge to support the community Drinking Water Safety & Security Plan (DWSSP) as well as hydrogeological support. If an additional funding source is confirmed, the Vanuatu program will include the support of the revival of a professional organisation, the Vanuatu Engineering Association.

These are just a few of the 60-plus EWB organisations partnering with communities in their own and neighbouring countries. Together they are member groups of Engineers Without Borders International, partnering with disadvantaged communities to improve quality of life through education and implementation of sustainable engineering projects.