Let’s flatten the curve, and let’s make the next curve flatter 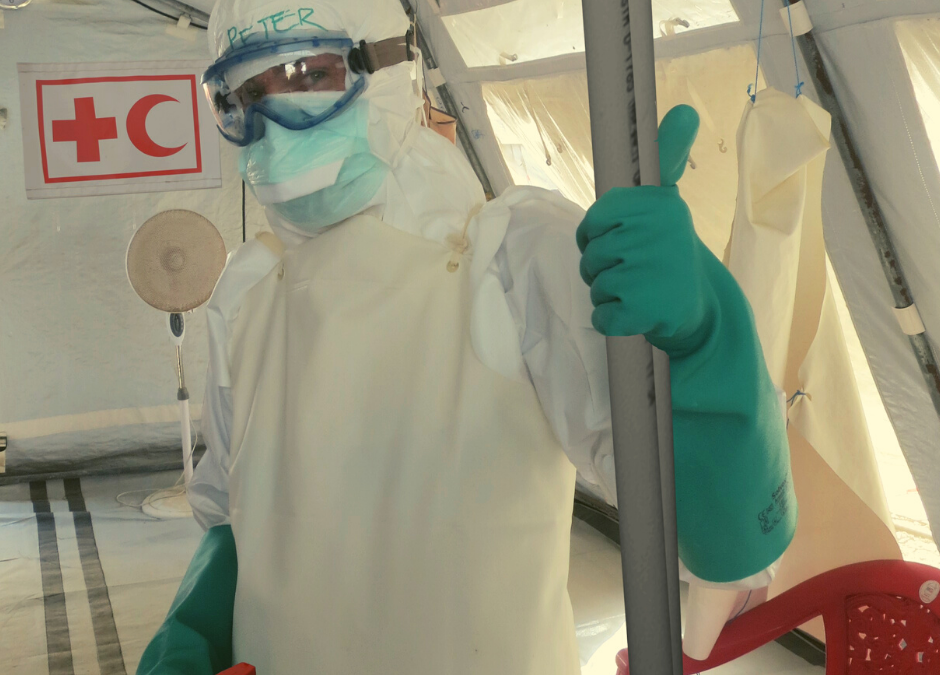 EWB Board Member Peter McArdle reflects on COVID-19 and where it lands in the humanitarian-development nexus.

Never before has the public been so captivated by a graph.

Sure, engineers are used to taking solace in the comfort of a curve, but this is not… typical, shall we say, of the broader community. I’ve found it quite remarkable how over the course of this pandemic, leaders, the scientific community and the public have come together and rallied around data for the common good.

‘Flatten the curve’. A three-word slogan that, when you think about it, has incredible depth to it. It’s simple. It’s unifying. It offers tangibility in a battle against something we can’t see. It’s a call to action. Brilliant.

I’m so intrigued by this because I know intimately well how difficult it can be to convey an effective public health and wellbeing messaging like this. COVID-19 is not my first epi/pandemic. I worked in the Ebola Treatment Centres in Sierra Leone in 2015, and in Yemen in 2017 when a single country suffered 1 million cases of Cholera. I know it can be immensely challenging to advocate for positive outcomes that require disruptive change in a way that overcomes fear and scepticism, and instead empowers a community. That almost everyone I talk to these days is a decent armchair epidemiologist speaks volumes to the clarity of the ‘flatten the curve’ message.

As I write this, on 28th June 2020, Victorians are feeling nervous about new emerging cases, while I’m in NSW where restrictions are tentatively easing. Many countries around the world are seeing peak or even increasing cases, while Australia on a whole is starting to relax a little. Some people are in the midst of crisis while others are starting to recover and talk about what comes next.

In humanitarian policy speak, this middle ground between crisis and recovery is called the ‘humanitarian-development nexus’. It’s a space which often sees emergency measures like crisis funding dry up as focus shifts elsewhere. But then what? When the curve is flattened, do we go back to ‘normal’, or will there be a new normal – hopefully one that leaves us in better stead to deal with the next crisis? Will we face a similar situation again, or will the community be more resilient because we’ve learned, worked and improved?

True, ‘humanitarian-development nexus’ is a bit of a snore-worthy buzzword. But it’s an important concept, because it influences how we respond to crises. So how about we park the name for a moment, and instead think of a footy team that trains through the off-season. All that work they put in when the threats aren’t immediately obvious will almost certainly make them stronger and better prepared when the next big game comes around.

As engineers, we have a crucial role to play in both the on-season and the off-season. Good community outcomes in times of crisis depend on both, and EWB Australia’s work is clearly focused around that concept. Sometimes it’s called other names – ‘build back better’; ‘disaster risk reduction’; or ‘building resilience’, for example. But what these terms really mean in people’s day-to-day lives is that the stronger and better prepared a community is before a crisis, the gentler the impact when crisis inevitably strikes. This is what it means to be resilient.

Take EWB’s work in water, sanitation and hygiene (WASH), for example: you cannot flatten the COVID-19 curve if you cannot wash your hands. Investing in WASH both flattens the curve now and helps communities to be better prepared next time. Or, EWB’s efforts to strengthen the resilience of infrastructure in disaster-prone regions of the Pacific: more off-season prep so that communities are less impacted by the next disaster. Working on the current crisis with a view to what follows is as essential as it is challenging. So we’re up for it.

Let’s flatten the curve, and let’s make the next curve flatter.

Pictured: Peter working in Sierra Leone for the International Federation of Red Cross