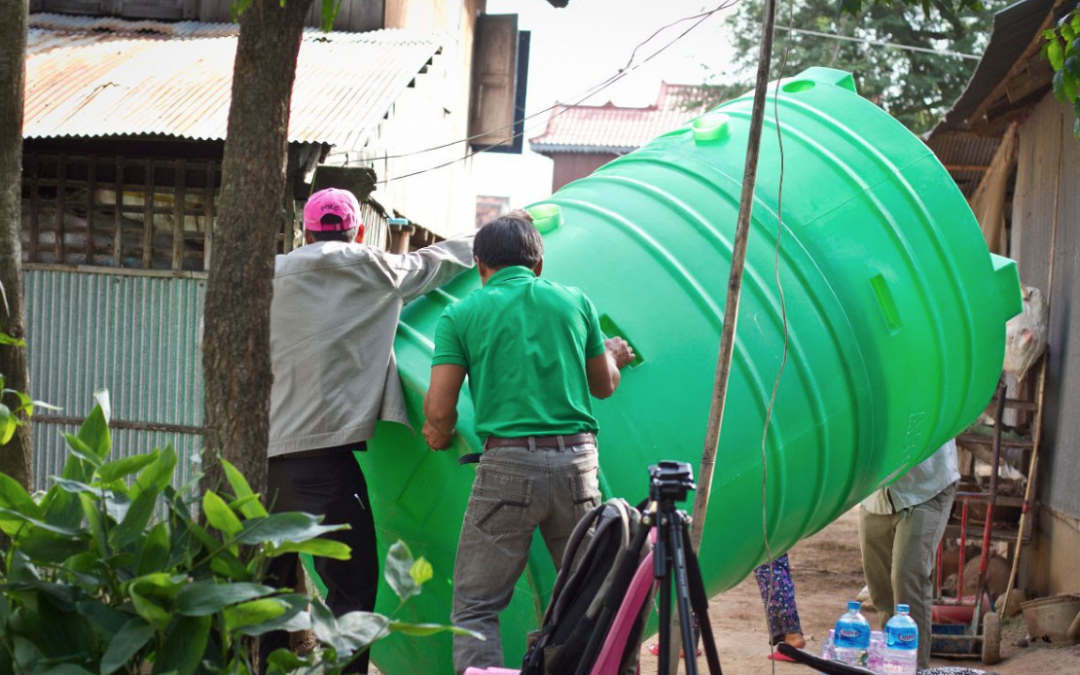 ATEC* Biodigesters (ATEC), an Australian Social Enterprise, has raised US$1,600,000 in a Series-B equity round to rollout the world’s first PAYGO (pay-as-you-go) model for biodigesters as well as to expand its operations from Cambodia to Bangladesh. The investment was made by a consortium of investors, led by ENGIE Rassembleurs d’Energies and consisting of Fondation Ensemble, IIX Growth Fund and Phitrust Asia.

ATEC was borne from an EWB Challenge project which asked students to address the challenges experienced by communities living on and around the water in the Tonle Sap Lake and River in Cambodia. The design brief asked students to conceptualise the sanitation issues involved with living on and around the water. EWB Australia iterated and further developed this concept, and the ATEC* biodigester was realised. It demonstrates the opportunity students have to make a real impact on the lives of the world’s most disadvantaged people, through their engineering vision. Engineers Without Borders Australia retains a 21% share in the burgeoning enterprise.

Anne Chassagnette, CEO of Rassembleurs d’Energies and ENGIE Chief Sustainable Officer, stated: “We are very excited to support the expansion of ATEC* and the deployment of PAYGO technology in small scale bio gas industry that will enable more people to access this clean sustainable solution. The mission and reach of ATEC* is fully in line with Rassembleurs d’Energies’s ambition to promote access to sustainable energy for all.”

ATEC’s unique household biodigester technology was founded and developed for specific application in seasonally-flooded countries such as Cambodia, Bangladesh, Myanmar and Indonesia. By installing a biodigester system, farming households utilize gas as a source of reliable and free energy, replacing traditional wood-burning cook stoves with a cleaner, healthier, and eco-friendly alternative.  The system also produces a high-quality organic fertilizer that increases crop yield and can also be used as a substitute for chemical fertilizer.  Combining these benefits, an average rural Cambodian family can save $521 per year, a short video on ATEC’s technology can be seen here.

“ATEC is the first globally to integrate PAYGO with biodigesters, meaning they’re finally affordable for almost every family in rural developing communities,” says Ben Jeffreys, ATEC* CEO, “working in partnership with our international debt providers, thousands of families will now have affordable access to clean energy and a healthier lifestyle.”

Under ATEC’s world’s first PAYGO biogas scheme, farming households who are unable to pay for the cost of a biodigester upfront can opt for easy mobile money monthly installment payments. The additional savings generated by foregoing the purchase of gas and chemical fertilizer would offset the payments. Trials to date under the PAYGO scheme have seen a doubling in lead conversion rates, increasing ATEC’s scalability by tapping into existing PAYGO distributors and allowing more small-scale farmers to afford the biodigesters.

Globally, there are an estimated 205 million farms that can benefit from biodigesters, with the majority of these being in Asia. South and Southeast Asia have the highest potential, with Cambodia and Bangladesh representing estimated potential markets of 1.3 million and 4.5 million farming households, respectively. However, the market for biodigesters remains largely untapped and one of the biggest hurdles is small-scale farmers’ inability to afford the upfront purchase price.

The funding for ATEC was secured with support from ATEC’s key partners, The Clean Cooking Alliance and Impact Investment Exchange.

About ATEC:  ATEC* Biodigesters is a new social enterprise that produces, sells and distributes a custom-manufactured biodigester design manufactured in Phnom Penh. The ATEC Biodigester is a rotor-moulded unit designed for the challenging environments of rural farmers.  To date over 1,500 units have been sold within Cambodia, providing renewable gas for cooking, 20 tons of organic fertilizer per year, and saving the average rural family US$ 13,025 over the product lifetime.