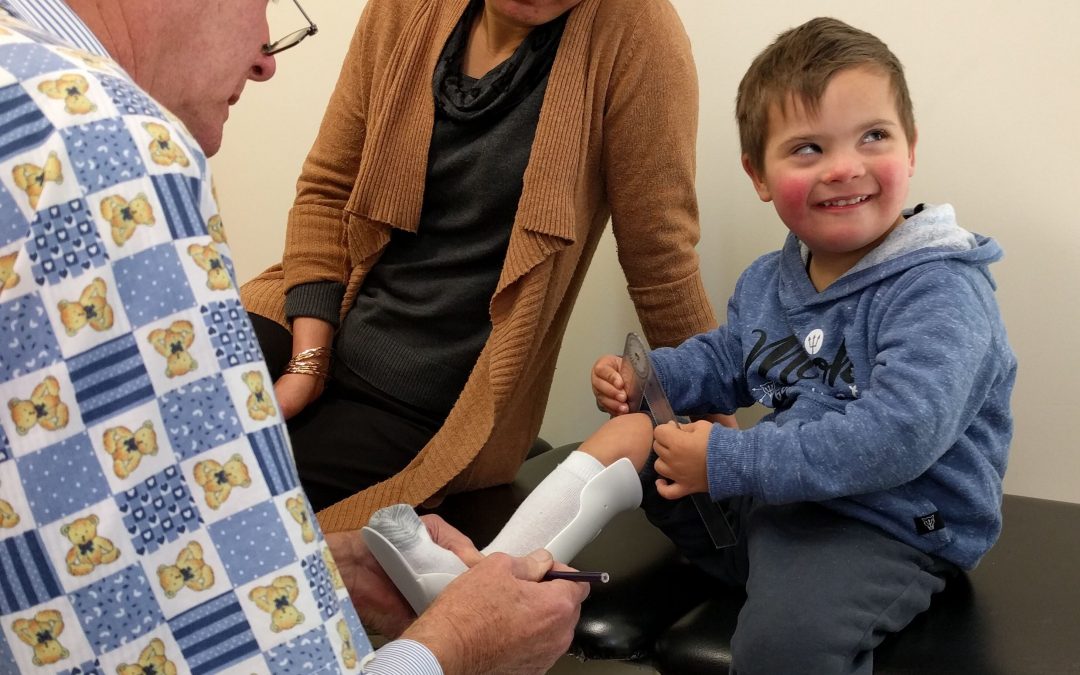 From ordering online for direct-to-your-door delivery, to real time video chat with the other side of the world, there are multiple efficiencies in our technological world that we all take for granted every day. A fact which makes it all the more troubling that many children with cerebral palsy must still endure traditional limb plaster casting and long waiting times in order to access ankle foot orthoses, a device that supports mobility.

In Australia, around 600 to 700 infants are born with cerebral palsy each year, and it is the most common form of childhood physical disability, affecting about 34,000 Australians. Caused by damage to the developing brain, cerebral palsy is a set of non-progressive disorders of movement and posture. Ankle foot orthoses (AFOs) are used as a form of physical support, and as children grow and develop they may need several sets of these expensive devices. The traditional plaster cast method is costly, messy and stressful for children, and long production lead times mean waiting lists can stretch to many months.

But there is a powerful tech solution reducing distress, expense and waiting times, and one that EWB Australia student researcher Koray Kilic helped to support – AbilityMade’s 3D printed AFOs. AbilityMade are a for-purpose technology company developing products that promote mobility and accessibility, and this pioneering method uses a portable laser to scan a child’s limb in seconds, and 3D printing technology to deliver low cost, high quality orthoses in days not months.

A mechanical engineering graduate of University of Sydney, Koray undertook his final year thesis with AbilityMade through the EWB Australia Research Program. AbilityMade joined the program 2 years ago to access specialist skills to bridge knowledge gaps and support product development. “The research brief spoke about these orthoses being at trial stage,” says Koray “and so what needed to be done was a range of testing to ensure these 3D printed structures are mechanically and structurally as reliable as the traditionally made ones.”

Koray was attracted to the brief because it had a clear technical deliverable in the mechanical testing, but principally because “it was a real life product that was going to be used.” Even before this research Koray knew he wanted “to do engineering but didn’t want to do something that doesn’t have a real positive outcome for people.” He decided he wanted to do his thesis through EWB Australia and work with a supervisor that shared his values driven mindset. “Some of the technical projects we worked on at university…if they had a positive impact side to it that would be a huge start in terms of getting undergrads to think about ‘why design this?’ Can we make it cheaper, or more efficient, or optimise it? Well, there needs to be a reason to do all of these things, other than just making more money.”

For his thesis Koray undertook a range of environmental testing comparing AbilityMade’s 3D printed AFOs to traditionally made AFO’s “to ensure that as the child uses these over 3 to 6 months, that the AFO can withstand the forces of use, impact, and wear and tear.”  The results were positive and conclusive. “We now know that our AFOs perform at least as well and last as long as a traditionally made polypropylene AFO.”

Koray explains what this now means for families who need and use AFOs. “Every child and their parent who was part of our clinical trial rated our process as better than their experience with the traditional method. When the child has to have a plaster cast made they may have to be held down for an hour.  This new digital process takes a maximum of a few minutes. The parents are very thankful for that, and as we are slowly gaining traction with 3D commercial scanners, we are starting to get more orthoses made.” By making the overall experience more positive, the aim as Koray points out is that “children will want to use this assistive technology…and will receive the optimal corrective outcomes.”

AbilityMade liked Koray’s work so much they offered him an internship which eventuated in the role of Research and Development Engineer, and in addition to this, he is also supporting a new generation of EWB Australia research students. The main aim of this he explains “is getting really talented and smart people to remain in this landscape, having a positive impact, because their minds are just burning for solutions to challenges.” The innovation outcomes for people living with disabilities are clear, and for Koray there is the added bonus of highlighting the importance of values led engineering practice. “I’d like to think that for these students doing projects with us, that the pay back is so much more than what they initially thought engineering was going to be.”

Koray was awarded the EWB Australia 2017 Making an Impact Innovation Award for his thesis work with AbilityMade.