The human centered approach to sanitation 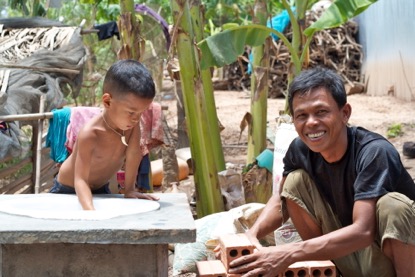 Just two months before this picture was taken, Mr Chin had never heard the word toilet before. He and his family, including his two young children and elderly mother, had been using nearby bushland to defecate in.

Since then, Mr Chin has invested his own time and savings to build a latrine for his family, and has helped several of his neighbours build toilets too.

He is now a ‘champion’ for toilet construction in the rural village of Reay Peay, despite never thinking he would be able to afford his own.

Mr Chin was convinced of the benefits – and affordability – after attending a people-centred design workshop held by EWB partners RainWater Cambodia (RWC) and Agile Development. In Cambodia – as in all of EWB’s country programs – people-centred values and approaches are central to EWB’s success in delivering sustainable, humanitarian solutions to development issues.

So what is people-centred design and how does it work?

People (or human) centred design is based on the ideology that people like Mr Chin hold the power to solve their own problems. According to design firm IDEO, people-centred design “offers problem solvers of any stripe a chance to design with communities, to deeply understand the people they’re looking to serve, to dream up scores of ideas, and to create innovative new solutions rooted in people’s actual needs.”

Since its inception, EWB Australia has been using a people-centred, strength-based approach to empower people to create lasting change in their communities. In villages such as Reay Peay, this approach is about building, or unleashing, the capacity of people like Mr Chin to draw upon their own knowledge, skills and resources to come up with solutions that they can truly own and maintain independently of EWB.

Unlike traditional aid handouts, a people-centred approach to sanitation can deliver immediate benefits – for example to health, safety and privacy – while also building networks of knowledge and skill around sanitation construction and maintenance. In the long term, the increasing demand for sanitation helps to create livelihood opportunities and stimulate local economies. This approach is especially relevant in Cambodia where foreign aid makes up roughly half of the government’s annual budget, making it one of the most aid-dependent countries in the world.

It is also a necessary approach in Reay Peay where roads are prone to flooding and flood-damage, making the community difficult to reach with supplies and support for extended periods of time.

As part of EWB’s Sanitation in Challenging Environments Initiative, Agile Development has been training RWC to facilitate people-centred design workshops in Reay Peay since early 2015. Managing Director at Agile, Ian Jones, says the process is about moving away from a “push” approach in which staff “talk at people… to getting people involved in the solutions themselves so they become owners of knowledge”.

“So the base of the idea is that after Agile, EWB and RainWater Cambodia leave, if anyone else wants to improve their sanitation, they can basically activate all their own knowledge, purchase their own equipment and be able to build their own latrines.”

Mr Jones says the first stage is about “finding out who is in the community – is someone a teacher? Is someone a carpenter? Does someone know how to build things?

“It’s about getting people to think about what it means to have good sanitation – ask questions like, ‘how much money do you spend every time you go to a hospital? How much time do you lose when you go to hospital? Is it that you can’t work in the rice fields?

“And it’s about identifying their existing knowledge as well – whether it’s floods, droughts, what the crop season is, how much money they have, what their financial assets are, work out how much they can actually spend or borrow and then start ideating with them about that.

“You give them an idea that sparks the innovation and then you facilitate the innovation with them.” This is what takes place in the design stage. In Reay Peay, workshops participants came up with three different latrine models ranging between $0 and $60.

Mr Chun Ra was the first person to build a pit latrine under this program. He is now a champion for pit latrines in his community, demonstrating the benefits of the toilet to other families within his community.

“It’s quite different between the past and now,” Mr Ra says. “When I walked to the forest, there are a lot of people that go to defecate here and there are bad smells – you can stand in it [faeces] sometimes. And now, my latrine is behind my house –maybe five metres away.”

Mr. Ra says in the future, if he has enough money, he will build a more expensive “easy latrine”. Giving people choice is another benefit of using a people-centred approach. In this instance, Mr Jones says it enables families “to see the benefit in actually investing the amount that they choose into their own sanitation solution.”

“A dry pit latrine is going to cost nothing but time. A clay pot toilet costs $30, and one with a pan and concrete rings can cost between $50 and $60. So it’s actually getting them onto the sanitation ladder in the first place so they can see the benefits, and then basically all the families become their own marketers. And they then accelerate the change.”

“It’s really changed – their attitude,” he says. “People think they have to spend $500 or $600 to build one toilet, but after talking to one of the elected champions they start to change their minds.”