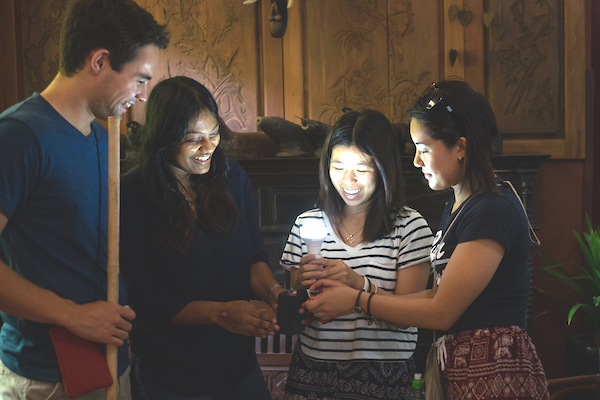 If you search “engineers” on Google Images what comes up? Men in hardhats. Men holding blueprints. Men operating machinery. Men stationed at an oilrig. These are the typical engineering stereotypes. Yet there is one group who struggles to fit the standard engineering mould: women.

Women have always been underrepresented in the engineering field. According to the 2011 census, only 11.8 per cent of Australian engineers are women compared to 3.4 per cent in 1986. While these numbers are improving they pale in comparison to other fields. Medicine was only 25 per cent women in 1986. However, they managed to improve this number to almost 40 per cent in 2014.

Engineers Without Borders (EWB) is aiming to change the face of engineering through encouraging gender equality in the industry. EWB gives engineering students opportunities to travel to disadvantaged nations like Cambodia, India or Nepal. Students can apply their knowledge and skills to design sustainable solutions for small communities. EWB humanitarian design summit coordinator Alanta Colley says roughly 50 per cent of their applicants are women. She says EWB provides a point of difference in the engineering field compared to the usual corporate or technical work.

“I think Engineers Without Borders is in a space between international development and engineering and it requires a whole suite of different skill sets,” Ms Colley said.

“So skill sets around communication, cross-cultural communication, an interest in development and a really people centered approach. Which I think a lot of both female and male students are attracted to because it is a bit more holistic than other engineering opportunities.”

Emma Dade is a corporate promoter for EWB in Western Australia. The environmental consultant says the program is important for both student learning and the engineering industry as a whole.

“[In] EWB, it’s amazing that we’ve got our overall membership more than 50 per cent females in an industry where that percentage is far far lower, it’s astounding,” Ms Dade said.

“Males and females, we interact with people differently. I think traditionally maybe it’s been more difficult for females to know how to use their traits to their advantage in the engineering world because it’s always been so technical.”

“But I think maybe part of what attracts the females to engineering is finding how does their technical knowledge fit within that nurturing and caring aspect of how to help society and how to help people.”

One woman interested in humanitarian engineering is Chloe Fakeerah, a first year computer-engineering student from RMIT.  She chose the degree due to a passion for computers. However, she was unsure if she wanted to be an engineer due to the high proportion of men in the field. In her first year, she has found it difficult to be one of the guys.

“It [being female] makes it a lot harder and a lot more intimidating when I’m in class,” she said.

“At first I didn’t like speaking up because everyone is pretty much a male. There might only be me and another girl in the class. So I don’t like speaking out because I feel like I’m the minority.”

“Not that [the men] are going to put me down but it is a lot more intimidating.”

Ms Fakeerah attended EWB’s June Cambodia design summit after completing a design challenge in first semester.  She says she found it a more pleasant environment to learn compared to university.

“It’s so much more comfortable here because not only are some of the facilitators female but half the group is female. So when I speak out I’m not in the minority and it’s all a bunch of males, there’s females there as well.”

Monash University head of Chemical Engineering Karen Hapgood says universities are aiming to make the classroom environment more suited for women. Improvements such as female engineering groups and more female lecturers at a first year level are being rolled out. Yet Ms Hapgood also says universities need to change how they represent engineering to new and current students.

“[Monash University is] thinking about how they portray engineering and sell engineering… so that it is more inclusive and not just the stereotypes of cars, engines, bridges and circuits,” she said.

“[For example], yes we have a bridge but we can talk about a bridge across a river for humanitarian reasons. Yes, we could a have circuit, but what if it was a solar powered generator for a remote village in Timor?”

“[This is] thinking more about the context and the reasons that people want to do engineering, which are changing over time.”

However, Chloe Fakeerah says these initiatives weren’t really present at her university when she enrolled, which made her and her colleagues wary of joining engineering.

“When [women] think of engineering they get worried it’s just going to be mainly males,” she said.

“But if [the university] advertise saying: ‘oh yes we’ve got female lecturers, we’ve got female teachers and this is the amount of females that we have’ it actually might increase the number of girls.”

Underrepresentation is not the only issue for female engineers. Once they leave university inequality issues come into play. Environmental consultant Emma Dade says the lack of support for part-time work hinder a woman’s ability to move into high-ranking roles.

“As much as I hate having to say it, I think that traditional maternal role that women play does create a barrier.”

“Because if you take 12 months out of work, that’s a one-year gap in your CV. In a very competitive industry, where upper management demands a lot, it’s not a ‘nine to five’ role as much… it requires a lot more input than that and a lot more stresses,” she said.

Ms Dade says this attitude will change once the older generation phase out of upper management. Her company, Jacob’s Engineering Group, is already taking steps to develop gender diversity portfolios for both men and women.

“Change is happening slowly. I do feel like there was always that sort of boy’s club mentality. But I think the people that are starting to move up with our generation up into management they don’t have that culture and that mentality.”

“So as more people from this current generation move into upper management, it might get rid of some of those barriers that might dissuade females from applying for those upper management roles,” she said.

“[If women] are at a more senior level or a junior management role at the time that they take their first break, it will be easier to go back into the workplace and continue their career,” said Ms Binai.

Monash lecturer Karen Hapgood says managers need to look at the American model for gender diversity. Ms Hapgood worked at a US pharmaceutical company with equal gender representation, and where experienced female engineers were employed in key roles. Their maternity leave was also more organised when she had a child.

“I famously met more senior women on my interview day than I had met in my entire engineering career at that time,” she said.

“They were all engineers, they weren’t senior women in HR, they were senior engineers. It was completely normal and unremarkable. So I went there in part because I could just go there and have a career. I didn’t have to pioneer anything.”

There are no simple solutions to gender issues, but one way to tackle a problem like this is through forward thinking and programs like EWB. EWB coordinator Alanta Colley wants the program to create more opportunities for women.

“We really hope that this [summit] opens doorways to support female engineering students in continuing in their degrees,” she said.

“From what I understand engineering in the engineering sector is about 15 per cent women at this point. Which really limits the creativity and diversity if you don’t have a really diverse sector. You have a limited number of people inputting into the engineering solutions that are affecting everybody.”

“So we hope engagement through EWB actually increases that longer-term engagement in the engineering sector overall for women as well.”

The perception of engineers will not change quickly. However, through initiatives at universities and companies, those men in hardhats may eventually become women with bright ideas.