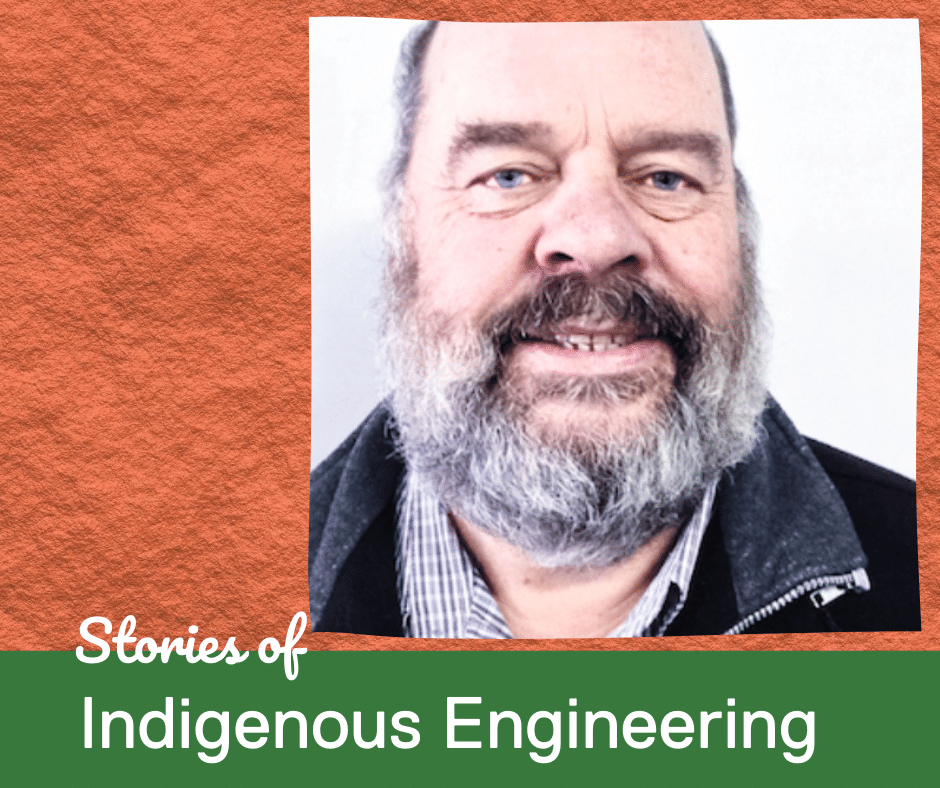 Denis Rose is a Gunditjmara person and works in Indigenous conservation. He shares his perspective in our Stories of Indigenous Engineering series.

“I’ve worked in Victoria and Canberra with National Parks and Wildlife Service as a ranger, but I’ve lived mostly on Country. For the last 30 years, I’ve been involved in conservation, cultural heritage and land management from an Indigenous point of view.

The Gunditj Mirring Traditional Owners Aboriginal Corporation was established to protect and manage the native title rights of Gunditjmara people.  We own about 3,000 hectares along the Budj Bim Lava flow in south west Victoria and these properties are declared Indigenous Protected Areas (IPAs). An important part of our work is managing these IPAs to protect their cultural and natural values. I’m also involved in the Budj Bim Cultural Landscape World Heritage Nomination.

Budj Bim is the traditional name for where the volcano erupted, it means big head. If you look at Budj Bim (or Mount Eccles as it is also known), it looks like a head sitting on flat country. There are a number of lava flows and volcanic eruptions that happened in western Victoria over thousands of years; Budj Bim erupted around 32, 000 years ago.

The interesting thing with the Budj Bim lava flow is it has a consistent, dependable water supply. It’s got a huge catchment that funnels into the Condah swamp, then Lake Condah then Darlots creek. This is where 6,600 years ago, the Gunditjmara people first constructed fish traps at what they call Muldoons fish trap. The system was developed from there.

The traditional engineering worked with the rise and fall of the lake and the related water systems. Over the years, Gunditjmara people manipulated the natural water supply systems to allow water in the fish traps for much longer times than just when the lake system was filling up. A particular system might come into play, then another one, then another one, so the systems had different water levels.

In the mid-70s, the state archaeologist Peter Coutts, did a report on the aquaculture system at Lake Condah titled Aboriginal Engineers of the Western District, which was a remarkable title for those days. That and the recognition by Engineers Australia with an Engineering Heritage National Landmark award in 2011 made us more aware of the degree of sophistication behind the aquaculture system. From a personal point of view, I didn’t realise there was so much science to it.

The reliability of water and therefore the reliability of food meant people lived a sedentary life which is evidenced by many  cultural sites on the lava flow. There are stone house sites where there was permanent occupation, and an extensive system of aquaculture  which overturns the notion that all Aborigines in Australia were only nomadic hunter gatherers. We built permanent housing near the rich food resources. It was about people using the resources and making time for other parts of their life; spiritual, educational, family, all those sorts of things.

In 2004 Budj Bim was the first place listed in Australia’s new National Heritage List and we are now pursuing a World Heritage Nomination for the lava flow based on the fact it is one of worlds’ oldest aquaculture systems. There’s not many things that were built 6,600 years ago that are intact today and still have people connected to them carrying on traditional practises.  We still have people catching eels and ladies making the grass eel baskets.

Our push for World Heritage listing is about recognition of what’s out there, what our forefathers did and the thinking they put into it. It’s also about better protection of the country and accessing some financial benefits with increasing tourism so we can be a rightful contributor and participant in the local economy. If we are successful, we will hopefully be inscribed onto the World Heritage List in June 2019.

The World Heritage listing will also highlight the education potential which is really important. There’s one thing that’s consistent when we take people out on country and show them the aquaculture systems and stone house sites. They always say, ‘We didn’t realise this. We were never taught this. We never thought to look at it from this perspective.’ There’s a lot of lessons that can be learnt; you can manipulate a natural ecosystem without causing irreversible damage like the large scale land clearing for European agriculture.

If a Gunditjmara youth is considering a career in engineering, he or she needs to remember that we’ve already had scientists and engineers in the past, it’s not a new field they are going into, it’s actually a very old field. We need to take pride in that and open our minds to the fact there’s great opportunities to do something with your life. We need modern engineering for things like building bridges and roads, but we also need people who can restore or re-instate some of the traditional engineering.

Having Aboriginal people working on projects in their own communities produces that pride that comes from people putting something back into their own country. In 100 years time, someone will wander out there and say my great grandfather or mother was part of the mob that put that weir back in and restored something that was done 6,600 years ago. That’s why I’m a lucky bastard, because I’m able to work on looking after country, improving country and making it better.”