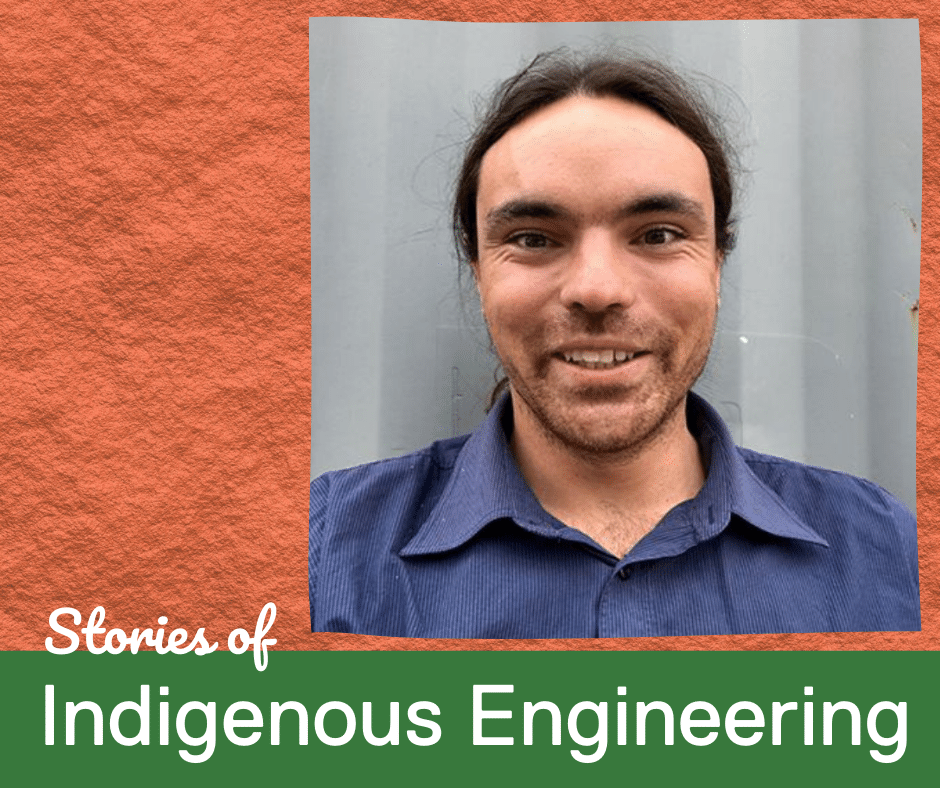 Alex Devlin is a proud Aboriginal man, descending from the Kamilaroi people

One of his passions is working with local Indigenous communities and providing pathways into and retention of Aboriginal people in the engineering workforce.

“I’ve always had an inquisitive nature about things and wanted to understand the environment and the world around me. I ask questions about why things are the way they are.

My family comes from the area around Barraba in northern NSW. I was born, raised and currently live on the Central Coast in NSW at a town called Lake Munmorah. It’s a very peaceful coastal town surrounded by lakes, national parks and the ocean. I spent my life there, went to local schools and played footy for the local clubs and learnt to surf.

When I was in school, university didn’t seem achievable for me as I didn’t know anything about it. I thought it was where you went to become a doctor or a lawyer. I didn’t look into it until my family made me aware you can do things that interest you and encouraged me to apply.

I decided to study civil engineering at the University of Newcastle because it combines two things I enjoy – construction and maths. The course involves a research paper. It is a lot of work, so I wanted to choose a research project I enjoyed, that I could connect with and had a bit of passion about.

Instead of using one of the suggested research topics, I came up with an original idea. My honours paper is titled Reconstructing Major Flood Frequencies using Aboriginal Knowledge.

Two things directed me to do my paper. The first was a course I did on structures where we were analysing the resistance of buildings to lateral loads like earthquakes. Buildings in Newcastle were used as an example as there is a higher probability of experiencing earthquakes here than in other places in Australia because of seismic activity.

The lecturer mentioned Newcastle might be more prone to earthquakes than we think as there’s a Dreaming story about a kangaroo trapped in the Nobbys. When he bangs his tail on the ground, it causes the earth to tremor. To me, that indicated that Aboriginal people had experienced earthquakes in the Newcastle area and recorded this, not in books, but in story.

We were told that knowledge of flooding started when flood records were first recorded back in the 1800s. I thought, ‘That’s not entirely true, Aboriginal people have been here for a lot longer and just because their stories are not recorded in cubic meters per second, doesn’t mean they didn’t happen.’

I wanted to acknowledge and recognise Aboriginal stories and knowledge and show they can be recorded and used to try and remove some of the uncertainty about the size of big floods. I used the Hunter River in Newcastle as a case study to see if my theory was worth investigating further.

I found really interesting Dreaming stories from the Awabakal and Wonnarua people about the formation of the Hunter River and journal entries from the early settlers about stories that had been passed down to them by local Aboriginal people.

I then compared models that used just Western knowledge with models that included Aboriginal knowledge and stories to see if it influenced the result and removed any of the uncertainty.

My research found that a lot of the uncertainty could be removed by including Aboriginal stories in the flood models. This means we are more confident of flooding levels for major floods.

The research was the first study of its kind and there was a lot of buzz around the university and in the Newcastle community. I was flown to an international conference in Kuala Lumpur to present my paper as there is international interest in including Indigenous knowledge in scientific research.

In Australia, Aboriginal knowledge hasn’t had a major influence in engineering, but after doing my research, I believe it has a place and I hope current perceptions will change. I focused on one river, but my theories and principles using Aboriginal knowledge can be applied it to just about any river in Australia.

Aboriginal people are heavily unrepresented in engineering, but I believe to truly achieve reconciliation, we need to be included in decision-making as opposed to people making decisions on our behalf.

I encourage Aboriginal people to get involved in professional careers as that’s where you can make a difference and stand up for our people and our communities.

I say to Aboriginal kids – ‘Be brave’. Engineering and science are one of the most rewarding careers you can imagine – it’s building the future of Australia. But you’ve got to step out of your comfort zone. There are thousands of opportunities to be involved through summer schools, scholarships and programs to get Aboriginal people there. I’d encourage everyone to be brave and to be part of it.”