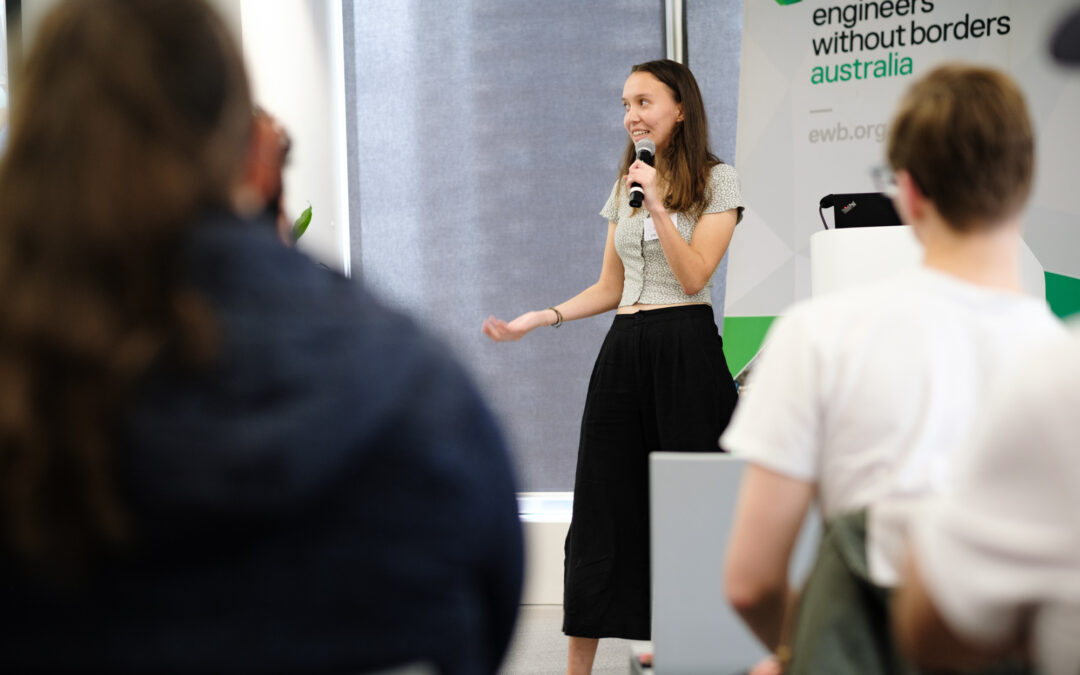 As Elise kicked off her first year studying a Bachelor of Civil Engineering at The University of New South Wales, it quickly became clear to her that girls still lack the opportunities they need in high school to set them up for success in a STEM career.

It wasn’t until Elise took a subject in programming that she found her true calling, and later made the decision to switch to a Bachelor of Software Engineering. Now in her third year of study, Elise is using her skills in software and data solutions to improve public transport timetable scheduling for Transport for NSW in her role as a cadet. She also volunteers her time with the UNSW Chapter as the Chapter’s Co-President.

Drawing upon her struggles and experience of ‘imposter syndrome’ during her first year of study, Elise is using her story to inspire young women to find the right career path for them. 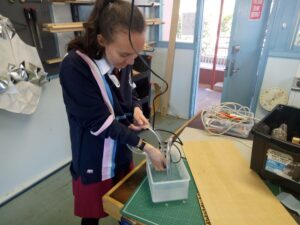 Elise working on a project for her grade 12 Design and Technology class; an aquaponics teaching resource to engage students with science and technology in primary schools.

Elise experienced gender stereotypes early on when it came to her education. At her all-girls high school, students had the opportunity to choose from a wide range of subjects such as food technology, textiles and child studies. However, Elise realised that it wasn’t sewing or cooking that caught her attention – it was what she learnt in her maths and science classes that truly fascinated her.

Her love of maths and science was encouraged by her teachers and her older sister, Adele, who also studied engineering at The University of New South Wales. When the time came for Elise to apply to university, it made sense for her to explore the possibility of being an engineer.

Having been accepted into a Bachelor of Civil Engineering at UNSW, Elise was eager to begin her studies at the start of 2020. However, within the first couple of weeks she noticed that some of her male peers had a considerable advantage over her. Unlike most of her cohort, Elise did not have the opportunity to choose engineering studies during high school. She initially found this confronting, and it made her doubt her decision to study engineering.

“I went into engineering not really knowing what it was like and what engineering actually involved. I really started doubting myself about my ability to do STEM… It was demotivating feeling like people had an advantage over you.”

These feelings of uncertainty continued to trouble Elise until she began a programming course. She had so much fun learning about coding and found herself excelling at it. This was a lightbulb moment for Elise. She realised that she always had the skills to do what she wanted, she just hadn’t found the right pathway yet.

“It’s good to be reminded that it doesn’t mean it’s the end of the path for you if something is too hard for you or you’re not fully enjoying it. It just means that you haven’t found your niche yet.”

The importance of role models in STEM 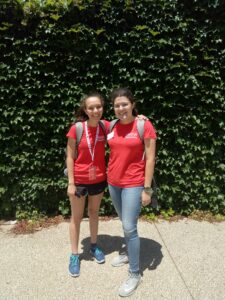 Elise with her older sister, Adele, at the UNSW Women in Engineering Camp in 2019.

Although Elise experienced many challenges during her first year of university, studying engineering also provided her with opportunities to meet like-minded people and positive role models. One of these opportunities was through EWB Australia’s Chapter network.

Elise first came across EWB when she was in high school. One day, Elise’s older sister, who was the School Outreach Director at the UNSW Chapter, asked her if she could help carry resources to an EWB Youth Outreach training day. It was here that Elise listened to a presentation about Youth and Community Engagement. Captivated by what she learnt, Elise immediately knew that she wanted to volunteer with an EWB Chapter. Elise saw this as an incredible opportunity to influence and inspire the next generation of young changemakers.

“I’ve always wanted to find a career that helps people and improves the world, and I think we’ve perfectly captured that through humanitarian engineering.”

Two years after attending that first EWB workshop with her sister, Elise is now the Co-President of the UNSW Chapter. She works closely with her team of directors to plan, organise and execute Youth Outreach Workshops as well as professional and social events for university students. Her role as Co-President provides Elise with the platform to pass on her message to young people: 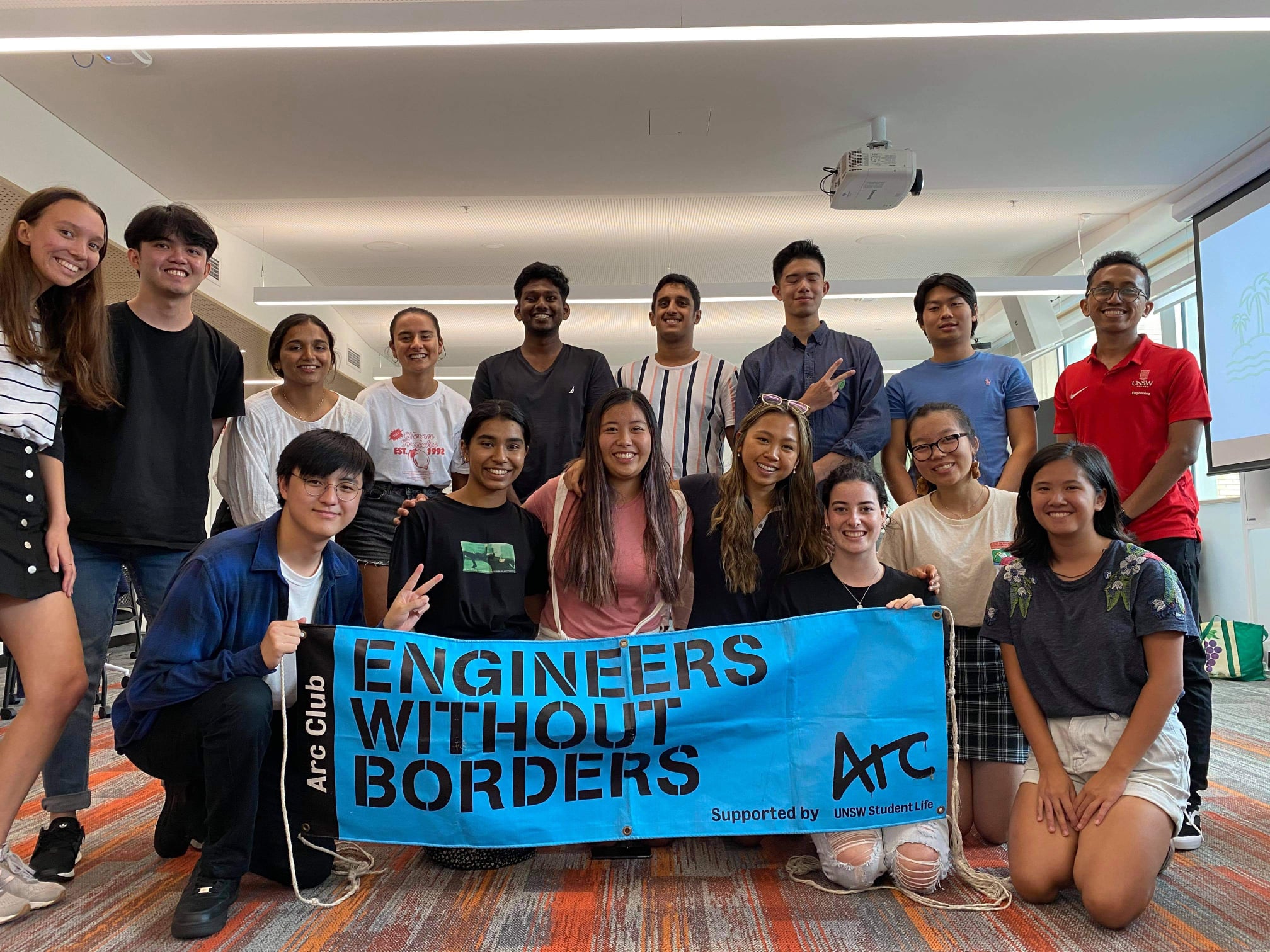 In Australia, women account for 15-20% of undergraduate engineering students and only 12.4% of engineers in the workforce. In a male-dominated industry such as engineering, Elise knows there’s incredible value in having inspirational role models for young people to look up to. By sharing her story and volunteering her time with EWB, Elise hopes that she too can be a role model for young girls, much like her sister was to her.

About the ‘Futur-neers’ program: This series is funded by the Australian Government Department of Industry, Science, Energy and Resources through the ‘Women in STEM and Entrepreneurship’ grant program. The program focuses on deeper support and amplification of EWB’s Youth Outreach volunteer network, with a particular focus on empowering women in engineering.

To read about our other incredible ‘Futur-neer’ role models in the EWB Chapter network, click here.