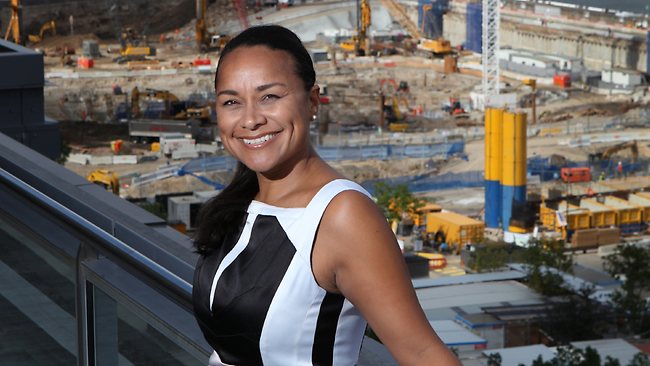 When people say what can I do, I’m just an individual, Arabella Douglas likes to remind them that they’re made of stars.

As you might guess, Arabella is passionate about how individuals can come together to create real change. That’s why her involvement in EWB’s upcoming Visioning Reconciliation webinar will be unmissable.

Arabella is a Minjungbal woman who is Principal of Douglas & Associates (D+A), and Principal Strategist at Currie Country (an Indigenous owned and operated cousin consortium). At D+A she specialises in helping private and public sector organisations to connect strategy, social impact and value, at the leadership level. As an environment and planning lawyer by trade, she feels natural talking to engineers about their role in reconciliation.

You’re a part of something big

Arabella believes engineers can learn a lot from the way Aboriginal and Torres Strait Islander people see the world.

“I would say that an Indigenous perspective is the new evolution of good scientific thinking in engineering,” she says.

It’s all about understanding the hierarchy of sciences and how your work in the built environment affects the larger systems around you.

“In an Indigenous approach to living, you use language like the dreaming and brother and sister relationships with plants and animals to teach how larger systems work. This language helps a  child understand these very sophisticated systems from a young age, and place the person correctly as the younger sibling to plant life and the natural world, with the theory behind it being deliberate scientific understanding.

Engineers are always in the mindset of thinking how does wind, rain, sun affect my building or my orientation, but not considering how the energy of what they do is also affecting that same system.

They should be attracted to see the world and their work in that framework. And when you do, you automatically have a different behaviour which is not constrained by what’s happening in the immediate. You are not only concerned with life sciences or the earth, but are concerned with everything that interacts and reacts and relates to it.”

The power of one

During the webinar, Arabella will be addressing the role of the self in achieving reconciliation. The first step, she says, is for people to have a consciousness of purpose. Again, it falls back on understanding how you are part of something bigger.

“In Aboriginal philosophy you don’t really feel lonely and isolated because you’re reminded that you’re connected to other animals and systems and plants a lot. So when you do feel your ego leading, and you start to believe that you’re lonely, you’re reminded very swiftly that you’re part of a larger system.”

Her other piece of advice is to cut out the judgement – which she says is your brain working in low gear. Supported by work given to by C.Jung

“You can’t be in judgement and be in creation at the same time. Your highest position for brain use is when you’re pre-thinking, like when you’re driving and daydreaming.

You need to seek that ‘feeling’ as an individual in every space, including how can I serve a RAP, how can I serve my workspace, what can I do to create a better Australia.

I would hope that young people start imagining and daydreaming about what it would be like to adopt Aboriginal principles in their living. How would that feel, what would that look like on a day-to-day basis, what does it look like when you’re in the workplace. That’s a great way to start.”

This year, Reconciliation Australia is urging people to take braver and more impactful action. It’s a theme that resonates with Arabella.

“I’m hoping young people aren’t imagining themselves in the Aboriginal dialogue as just being apologists and being unhappy about past tragedies.

I hope they imagine themselves next to me in a different way, talking about systems of raindrops and sound, vibration and how to move air in raindrops. I need you to imagine yourself in a cooperative way with an Indigenous future.”

“It’s difficult for engineers because the whole science base is what they would call logic but I just call repetition. Some people feel that logic is: if I do it a certain way and I can repeat it and the result is the same, then it becomes logical. No, that’s just repetition.

Genuine logic is for me, when you do something, you feel your way through it, and everything else that happens in that decision and the moment. Then you know that you’re living in an aligned way.”

So what does taking action look like for engineers as individuals?

“It means less ego and more eco. Don’t live with domination, live with cooperation. It means practice it on the small minutia every day level and enjoy leading in cooperative models.”

When you listen to Arabella, you can hear her determination bursting out. She wants everyone who joins the upcoming webinar to be inspired to take action.

“I want them to come away passionate warriors for the world, to go yes, I’m on it, I’m about it, I’m on the bandwagon of creating a different type of future.”

Arabella is a panelist for EWB’s Visioning Reconciliation webinar and workshop on Thursday 27th May, from 7pm. She’ll be joining Shane Kennelly, George Goddard and Marcella Brassett in exploring a utopian future where Australia is a just, equitable and reconciled country. You can book your ticket here.