On Vanuatu’s 85 islands, many people live in challenging sanitation environments, including areas that are drought or flood-prone, coastal, on hard rock, with high groundwater or in difficult social contexts. Sanitation issues in Vanuatu are exacerbated by natural disasters like category five Cyclone Pam, which caused severe damage to buildings and critical infrastructure in 2015.

Sanitation, hygiene and access to clean water aren’t only critical to prevent the spread of disease; they are also linked to a range of positive social and economic outcomes, including increased school attendance, employment and food security, reduced hunger and poverty, and even energy production. This explains why the project to develop sanitation and hygiene guidelines in Vanuatu is linked to so many SDGs, not just SDG6: Access to clean water and sanitation for all.

With only 28% of Vanuatu schools having toilets in good condition and about half of the population without access to basic sanitation, the Environmental Health (EH) unit team from the Vanuatu Ministry of Health (MoH) has been focused on developing national hygiene and sanitation guidelines and standards for rural areas to improve consistency in sanitation interventions, as well as the quality of sanitation designs, accountability and monitoring. The EHU team has been assisted in their work by EWB Australia and EWB New Zealand, and key partners from the Sanitation and Hygiene Working Group, such as UNICEF, WHO, local communities and a range of non-government organisations (NGOs) making sure the needs of women, girls and other vulnerable segments of the population such as people living with a disability are considered.

These consultations and broader literature review undertaken leading to tailored designs and guidelines for inclusive sanitation and hygiene fits well under the 2019 theme for World Toilet Day: leaving no-one behind, recognising the particular vulnerability of some community groups to access basic sanitation due to some special needs.

The EWB team have been involved in the development of the sanitation guidelines since mid-2018, as part of the Sanitation in Challenging Environments (SCE) program. Before they could be finalised and receive approval from the Executive Committee, a testing phase in the community was vital to ensure they were appropriate for the local context. Good progress has been made to refine and test the guidelines with field trials and the collection of user feedback.

EWB Australia’s Vanuatu Country Program Manager, Stephanie Hamel, has helped coordinating meetings with key stakeholders at the provincial and national level to collect feedback on sanitation designs and to ensure the guidelines receive an appropriate level of practitioners’ inputs. It is also important that the information is comprehensive and clear, and presented effectively to ensure  the highest potential uptake. Field testing has involved socialisation workshops in Sanma and Malampa Provinces, where Stephanie and the EH unit team has overseen the construction of various types of demonstration toilets.

The first demonstration toilet was constructed in Sanma Province: a ventilated improved pit (VIP) latrine with an additional tap inside the toilet so that women can have privacy to wash menstrual clothing. 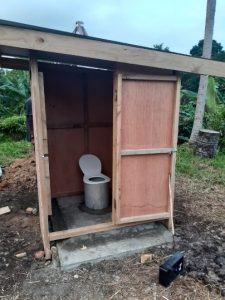 In Malampa Province, at a location where more water is available, a pour flush toilet was constructed in a health centre.

This toilet type is useful when water is available for flushing but not reliable enough to feed a flush system with a septic tank. A simple VIP latrine was also constructed in a school nearby. The construction of an inclusive toilet (accessible to people with disabilities, in particular wheelchair users) with a septic tank was also completed in Sheffa Province.

Specific outputs that came out of the trial constructions and workshops were: improved bills of quantities and standard drawings, user preferences regarding inclusive design features, an understanding of both the importance of the design criteria and levels of information required to operate, and the creation of maintenance posters.

To ensure the sanitation guidelines are enforceable, they have been listed as a specific direction under the Public Health Amendment Act (part 8). Failure to comply with the guidelines is ‘punishable upon conviction’ under Vanuatu Government legislation.

This project is currently on track, with the guidelines expected to be finalised in November 2019 and translated into Vanuatu’s three official languages.

You can also help support this program. Please donate today.