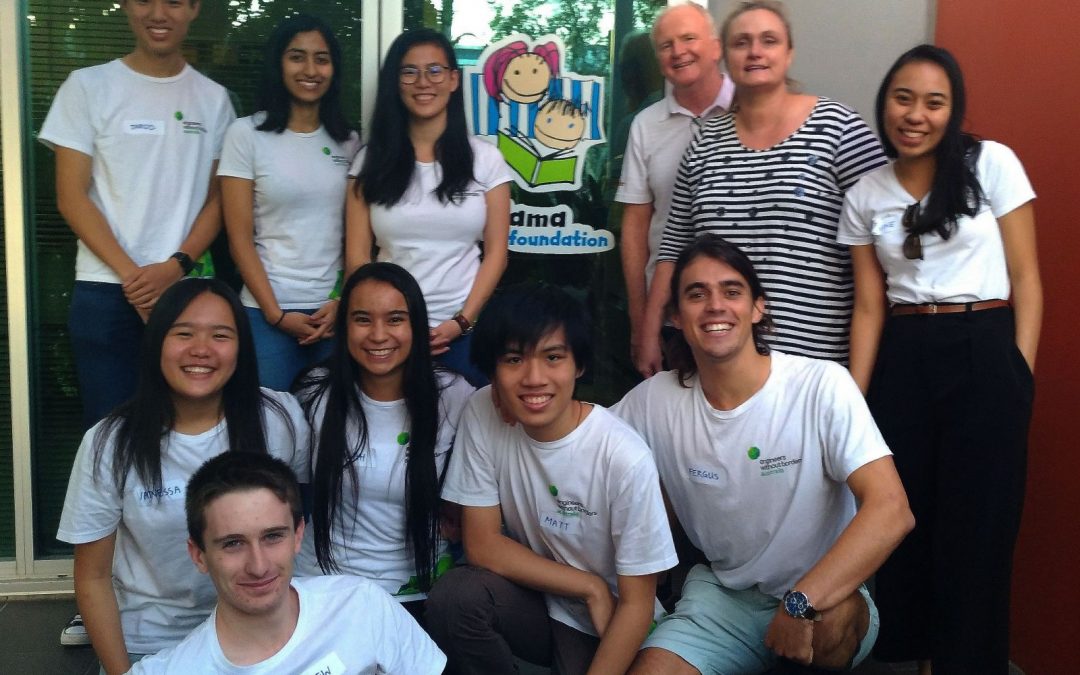 Kevin Gallard National Program Manager for The Pyjama Foundation, is describing the response of Pyjama Foundation staff as they watched ten EWB volunteers from Queensland University of Technology teaching STEM principles to a group of foster children.

“I can’t tell you what a thrill it was for our staff, and especially all the Foster Carers in the room, to have these motivated, caring and intelligent young adults standing in front of 26 children living in foster care, and sharing not just a message of helping others, but also a vision of what is possible for their future. One of the greatest issues for children in care is a lack of knowledge of life’s possibilities and a vision for their own future. It was a spine tingling moment for all of us but especially the Pyjama Foundation founder, Bronwyn Sheehan. Learning experiences such as this were precisely the reason she set up our foundation.” 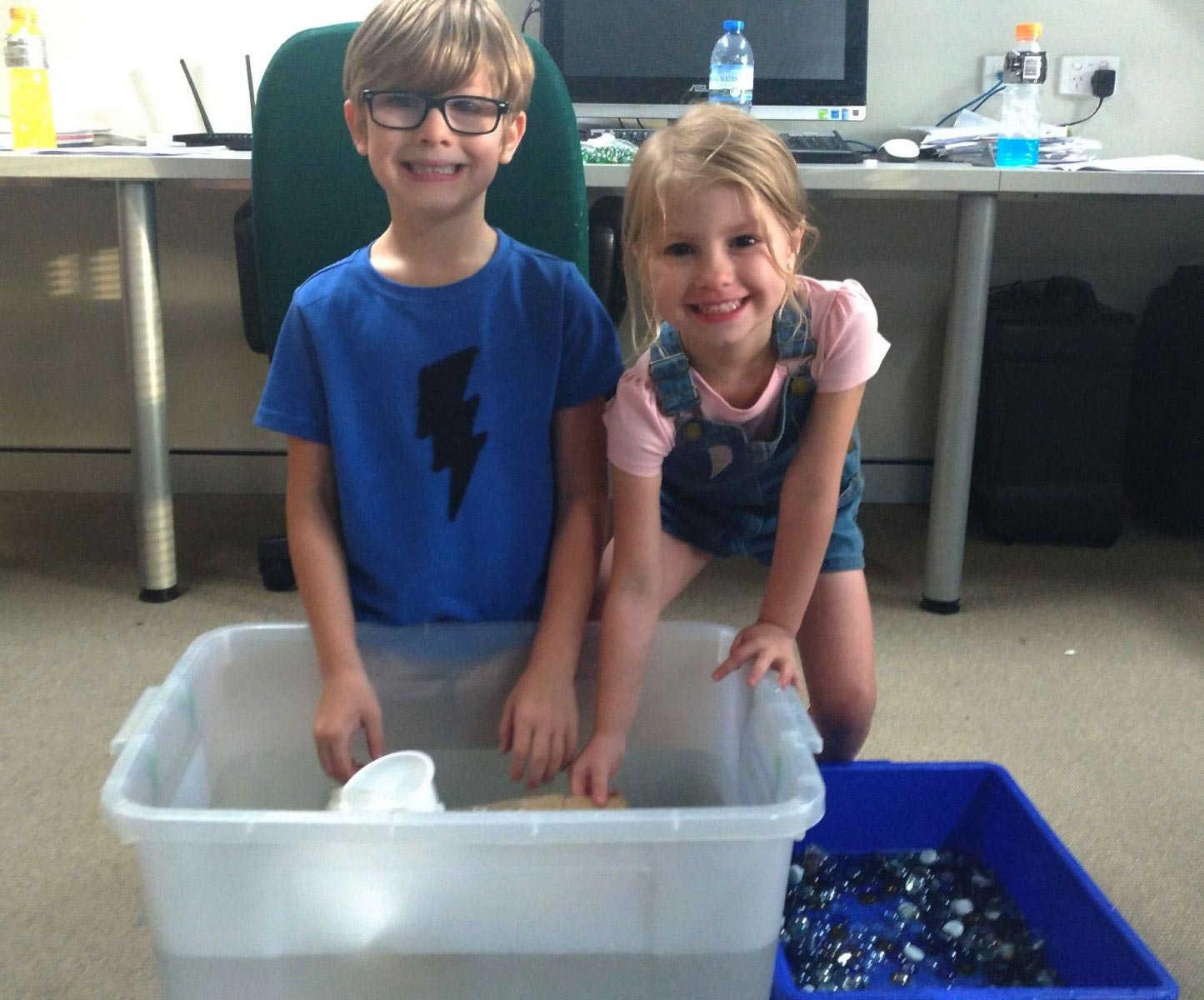 Kevin explains why. “The effects of trauma can be ongoing for a child in foster care. These children face lifelong issues with how to deal with everything that life has thrown at them. They get stressed out, they have much higher rates of ADHD, and there are all sorts of physical and developmental problems as well, and of course they have huge issues building positive relationships.”

The Pyjama Foundation was founded in 2004 by Bronwyn Sheehan after she was introduced to a foster carer. Bronwyn felt she had to do something to help children in care, and today The Pyjama Foundation aims to close this gap of disadvantage by connecting children in care with supportive adult mentors to empower them and increase their learning outcomes.  The Foundation today recruits and trains volunteers around Australia to visit 1300 to 1400 children each week to do homework and play games with the child. The aim as Kevin explains is to “create a trusting relationship with the child, always with the goal of improving that child’s learning outcomes.”

Creating a stable environment for foster children, and providing mentors that they can trust has been shown to have a very positive impact. “The Pyjama Angels come in once a week, and they are a happy person who doesn’t want or need to know the child’s back story. They just want to engage with them and show that child what they can do, rather than focussing on their problems. The child knows that there is someone thinking about them, and the very knowledge that someone is thinking and caring about them has a huge impact.”

The EWB chapter at Queensland University of Technology (QUT) were seriously inspired by the work of The Pyjama Foundation, and contacted Kevin to explore ways to bring EWB’s STEM School Outreach program to children in foster care.  “At first I thought, oh it’s going to be a lot of work, let’s just see what happens,” says Kevin “but that meeting was just so enthusiastic. I thought this really will be good, these EWB volunteers are so keen!”

The EWB QUT team adapted the School Outreach program a little to better meet the needs of the foster children and their carers. “When you invite a foster carer to come to a workshop, they might bring six kids with them instead of four because they took in extra children overnight, so you could have a mix of teenagers and younger ones. We had a noisy room of about 26, ranging from age four up, and I even think there was a baby crying somewhere.” jokes Kevin.

“With the EWB volunteers telling their story first, that really got the kids engaged to see that the focus was on designing for people who live in a totally different situation. The team did a really good job of pointing out while here in Australia we use steel for construction, in South East Asia that just isn’t going to work, so they use different materials. A number of the kids were really interested in that and you could see their grey matter ticking over – ok so though we wouldn’t do it that way here, that doesn’t mean it can’t be done differently.”

After being introduced to STEM principles by the volunteers, the children had the chance to compete as teams to build a raft transporting a maximum number of marbles while staying afloat. “For the group that won, that challenge was really impactful for them – I think they got a 100 marbles into it or something, which was fabulous!” laughs Kevin. “Building the rafts with different materials, and learning how people in other countries have to think and manipulate the materials that they have, that was the best moment for the kids.”

But don’t just take Kevin’s word for it., this is Tommy* who attended on the day:

“We did heaps of stuff. We got to learn about structural engineering in different countries and the different types of engineering. We also got to try to make a miniature floating platform with different materials and then see how many marbles it could hold while floating in a container of water before it sunk. The most fun was meeting new people and learning new stuff about the different types of engineers. I learnt that there are different kinds of engineers, it makes sense but I had never really thought about it. I also learnt that in other countries there are different limitations on building because of different materials, but they still build things anyway. In future I would like to become a programmer, which might then lead to working with engineering but I’m not sure if it will yet.”

Marbles aside, for the adults in the room the most powerful moment was when the EWB volunteers told the children what they were studying. “The kids’ eyes really lit up – one said they work with robots, and the kids thought ‘Wow engineers do that!’

“An underlying goal of our program is to “lift the gaze” of children in care,” explains Kevin “and this band of ten Engineering students, from various fields of study, was definitely a shining example for our kids to gaze at. Bronwyn Sheehan was there that day and the impact on her was huge. So many children in care see a lifestyle of dependence on government funding and benefits, and don’t really understand or know what’s possible out there for a professional life or study. Many don’t believe that university is for children who grow up in a care background, that it is something they can do too. To have these young people show these children that there is another way – that you can do these things, well that was super for the rest of us!

Having seen the impact first hand there is now a lot of motivation from The Pyjama Foundation to make it happen again. “I instantly afterwards emailed all our regional coordinators and said have a look online for an EWB Australia chapter near you. We just think it’s a wonderful program.”

*In order to protect privacy, Tommy is not his real name.