From Aid to Enterprise with Atec* 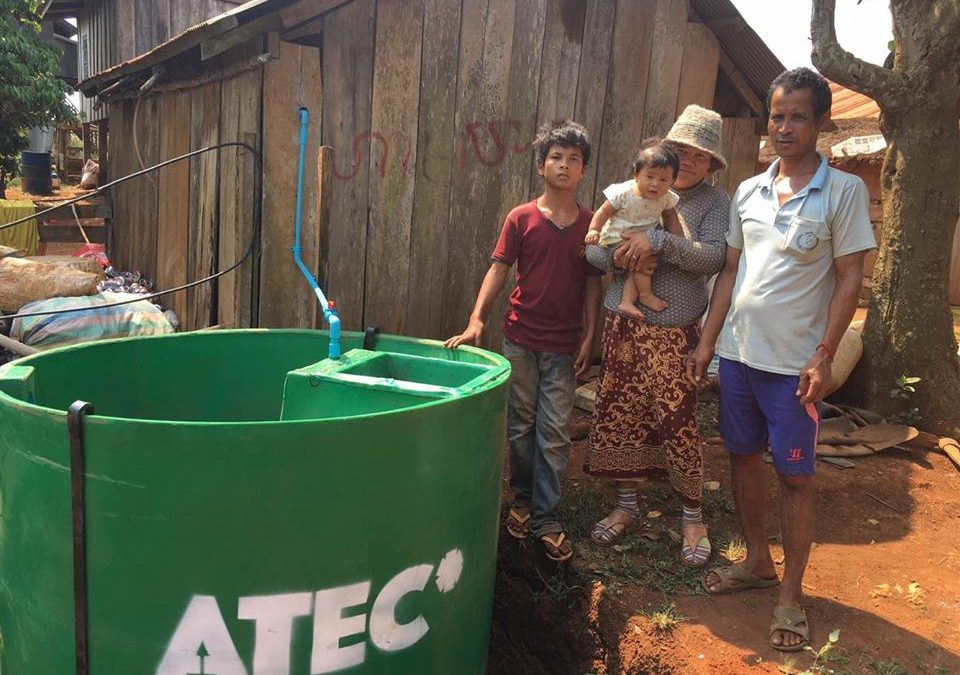 Like 85% of rural Cambodians, Long Sokhon made a modest living off the land. She grew rice along a one-hectare piece of earth cleared from forest. She tended two buffalo during the day and cooked for her family of eight over a wood-chip fire by night.

For her family, living in the flood prone region of Cambodia known as the Tonle Sap, where the water could rise and fall by 15 meters depending on the season, provided daily challenges. In the flood plains, without access to sanitation and toilets, human and animal waste directly enters the water creating significant health risks for millions reliant on the lake water for their survival.

Then, Long Sokhon was given the opportunity of having a tank installed in the vegetable patch behind her house. The tank is a biodigester, a piece of appropriate technology that combines manure or kitchen waste with water to create fertilizer and gas for cooking.  Sokhon feeds waste into an inlet at the top of the tank daily, places two buckets of buffalo manure mixed with water and in return receives biogas for cooking and fertilizer to grow crops.

The Biodigster provides a simple solution to a number of the significant challenges faced by the communities they serve. For rural Cambodians, 90% of their daily energy needs are for cooking.  It’s this output in particular which has most early adopters of the biodigester excited – especially in a wood-burning country where only 3% of the primary rainforest remains. Additionally, it addresses the biggest silent killer in Cambodia, kitchen air pollution from smoke, which is responsible for an estimated 14,000 deaths per year in the country, five times more than from road accidents.

It’s not only the biogas that has Cambodians excited; the organic fertilizer they receive from the unit is also high in nutritional value and trace elements which commercial fertilizers can’t provide.  The organic fertilizer, bioslurry, can increase agricultural output between 5-20% compared to traditional farmyard manure.

Between 2008 and 2012 the project, with orginal funding from the ANCP, saw Engineers Without Borders Australia and Live and Learn Environmental Education install 30 biodigesters. The project has also been held up as a beacon of innovation in development and in 2014 was awarded a Google Impact Challenge grant of $500,000 AUD in order to scale the project into a locally run social enterprise. A prospect that is now gathering momentum and providing an opportunity for Cambodian entrepreneurs to develop livelihoods from an unlikely source.  The goal now is to build a business that provides sanitation, energy and livelihood options to 1.2 million Cambodians by 2024.

The Biodigester project has proven successful in a number of ways. It provides a successful example and case study of a development model that promotes government, private, community partnerships that have sustainable and long lasting social and environmental impacts.  With a number of partners involved, the project is showing that collaboration between sectors can provide powerful development outcomes for those who need it most.

Secondly, the project is resulting in tangible improvements in the quality of life of those using the technology. Sokhon’s health has increased dramatically in the absence of the wood fire smoke that once caused problems with her lungs and meant continual headaches. With the help of the organic fertilizer produced by her biodigester, her rice and sesame crops now produce twice their normal annual yield and she estimates savings of up to 50,000 riel ($16 AUD) per month on medicine and 900,000 riel ($299 AUD) per season on fertilizer. When asked how she invests her newfound time, money and energy the answer is profound — in her childrens’ education, in order to give them a better life.