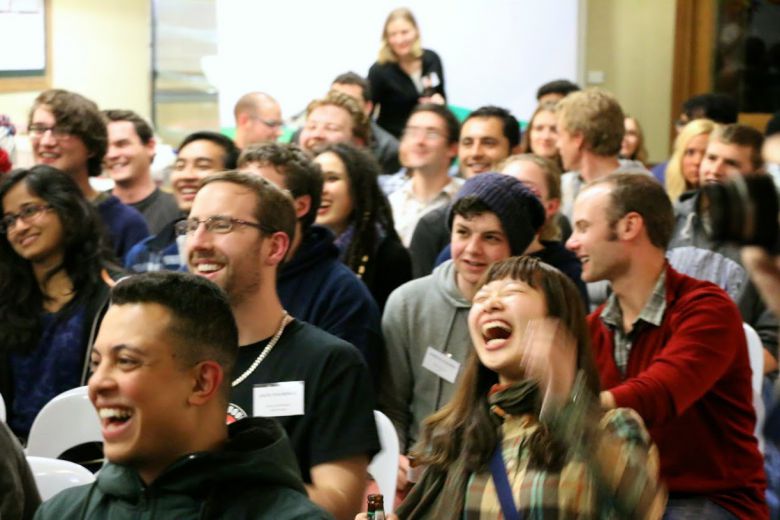 The company has an established partnership with EWB and encourages their employees to be involved in a wide range of EWB volunteering, mentoring and fundraising activities.

However, the realisation that the majority of active participants were young professionals sparked the idea for a campaign to attract a greater variety of active members. By raising awareness of EWB and the many different ways employees can get involved, the 40over40 campaign aims to engage senior leaders and sign up 40 new EWB members.

Matt Sorenson, a civil engineer and project manager and Hong Vu, an environmental engineer, volunteered to run the campaign. Both are active EWB members and work in the water team in Arup’s Brisbane office.

Hong was very involved with EWB at university and wants to see more EWB initiatives in Brisbane. “EWB values really ring true to me. I think the way they go about trying to build capacity in the community through education and awareness, not so much through handouts, is really great, “explains Hong.

Matt has been involved with EWB for eight years. “It provides an outlet for people like me who really want to give back to the community, both locally and abroad, and do it in a way which puts the best of our skills to use,” he says.

Both believe the main challenges with the campaign are explaining options for involvement and promoting how EWB is aligned with Arup.

To clearly explain what EWB does, how it works and how you can become a member, Matt and Hong have put together an intranet page which summarises EWB within Arup, highlights the benefits of EWB membership and shows the different ways employees can get involved. The idea is to have all the relevant information succinctly collated in one place.

In-addition to factual information, they believe sharing members’ stories will highlight the benefits of involvement and the variety of EWB initiatives such as School Outreach, Humanitarian Design Summits, EWB Connect, fundraising and mentoring.

“We are trying to get people who have volunteered with EWB or been involved in an initiative to publish their stories or do a lunch time talk to show what can come out of being involved,” says Hong.

A major focus of the campaign is promoting engagement of senior staff and Matt and Hong believe this will encourage other employees to get involved. They plan to invite senior people to nominate staff members as ambassadors and have developed specific strategies to capture the attention of time poor managers.

One is getting EWB Board Members (there are currently three in Brisbane) to speak at lunch time talks.

“All EWB Brisbane Board Members are prominent professionals in their respective fields. That’s a good way of getting some respect and having people that senior members can relate to who are actively involved in EWB,” explains Matt. “We’ve suggested other offices get their local EWB Board Members to do lunch time presentations as well.”

They also plan to highlight opportunities for people who are time poor such as reviewing EWB Challenge reports for first year university students, or overseeing pro bono projects through EWB Connect, a program which matches engineering companies with community groups who need assistance to realise their visions.

“I think it’s really motivational and inspirational to have leaders involved in EWB. At the moment it’s a lot more junior staff running the initiatives and volunteering. If your direct leader is working on a pro bono project, it sets a really good example and there would be a roll on effect throughout the rest of the team as it encourages other people to get involved,” says Hong.

One of the senior people within Arup who is already involved with EWB is Daniel Lambert, Australasia Water and Urban Renewal Leader. Daniel has been volunteering with EWB for ten years and actively encourages Arup employees to get involved in community engagement projects.

““Engineering is a profession where we have opportunities to genuinely impact and transform peoples’ lives. I enjoy working with EWB because they create opportunities to utilise the skills, experience and knowledge of their partner firms to make a tangible difference in communities,” says Daniel.

After nearly a year in the planning, Hong and Matt are ready to launch their internal marketing strategy and are working with EWB representatives in other Arup offices to roll out a year of promotional activities aimed at all levels of staff.

“The name sets the scene,” says Hong, “but we are not being exclusive to staff over 40.”

“Our ultimate goal,” says Matt, “Is to make ourselves redundant. We want the campaign to ensure being involved with EWB becomes a part of normal operations so you don’t have to have campaigns every year, it just becomes business as usual.”

Visit our Corporate Engagement page for more information on how to get involved with EWB.