A day in the life of a Field Professional – Part 4. 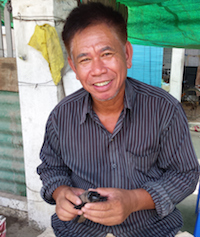 By Lachlan Guthrie – originally published on his blog.

This is An, he is one of the most fascinating people that I have met in-country. I was just walking down the road one day and he called me over for a chat. He’s just a man that wants the best for his country and his family and tries to do what he can to help.

After being a soldier when the war was over(ish) he learnt English to help American development practitioners with their work in rural Cambodia, at the time a very dangerous task. He then translated for the UN for a decade and after he retired has since taught many many Cambodians English increasing their chances for success in a developing economy. Now he helps his wife with her borbor stall (rice porridge) which is run out of their home.

The first day I met him he spoke to me about the importance of being polite and treating everyone equally regardless of background, social status and wealth. Overt displays of wealth are common here and there is not the same tall poppy syndrome that is ingrained into the Australian cultural psyche. “They wear nice trousers but throw bottles into the rice field, how is this civilised?” he asked me rhetorically. I couldn’t agree more.

After one of our chats he eagerly gifted me a prized possession of his, a book written in both English and Khmer that teaches children about carefulness, which he coordinated and translated. He was equally pleased when I gifted him a toy Platypus, that you can see him holding here.