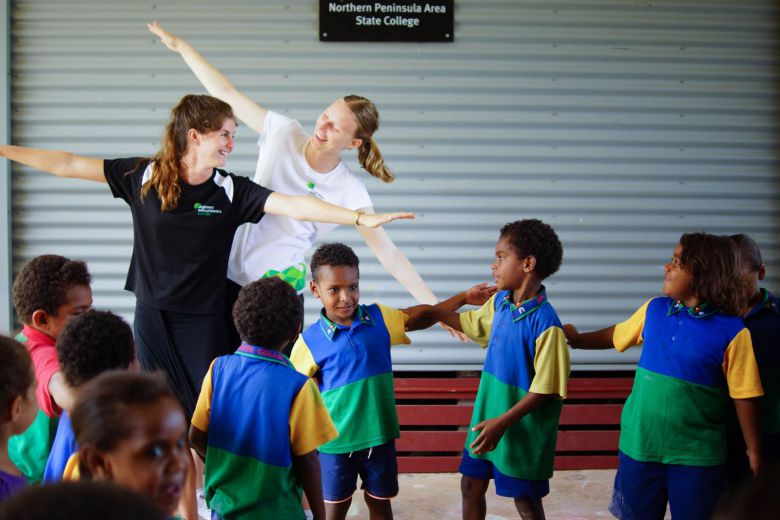 Inspiring the next generation of STEM professionals and humanitarian engineers. Chelsea Hayward and Talia Rose stand on the coast of Thursday Island, one of 274 islands that dot the Torres Strait. It’s 8 p.m. and the sky burns crimson. The inky sea tongues the shore and points towards Papua New Guinea, only 150 kilometers across the water.

Talia and Chelsea, students, humanitarian engineers and members of Engineers Without Borders Australia’s University of Queensland chapter, have just completed a Regioneering trip through Australia’s far north. The aim, to connect students in the area with the power of science, technology, engineering and maths. Both as a career option, but also as a method to solve some of the social and environmental challenges the communities face.

“There are lots of role models for succeeding in sport in the Torres Strait,” says Dianne Hughes, a year five teacher at Tagai State College on Thursday Island as her class constructed water filters under the watch of Talia and Chelsea. “We don’t have those role models in science, maths and other academic pursuits,” she says. “That’s what our children really need—to be able to imagine their lives in different ways.”

EWB’s Australia’s Regioneering Coordinator, Emilie Nachtegill says this is the power behind the Regioneering program. “For these students, having two female engineers as role models and teachers is a powerful experience. The fact that students are also having fun and learning skills that can help them create stronger communities adds to the impact.”

For three weeks, Talia and Chelsea facilitated workshops with 3000 students in the area. For Chelsea, a Chemical and Environmental engineer, this trip was especially important.

“On the Torres Strait there are a lot of Aboriginal and Torres Strait Islander students,” says Chelsea. “Opportunities on the Island are quite limited, which makes this Regioneering trip unique.”

One of EWB Australia’s suite of education programs, Regioneering, has successfully delivered School Outreach workshops since 2010—engaging 10,000 students across Australia in 2014-15 alone.  Now, thanks to a generous grant and a partnership with Google, EWB Australia was able to expand the school outreach workshops to areas such as the Torres Strait.

The workshops focus on four areas: energy, water filters, floating houses and prosthetics, and share a common theme: interactive problem solving and hands on learning. By anchoring each challenge in a real world scenario—building floating housing to withstanding the rising tides of Cambodia’s Tonle Sap, for instance—students learn how engineering skills can be leveraged to tackle real world issues.

“Today we learned how to build and how to design,” says Riven Warrior, a goateed senior at Tagai State College. His class has just finished the floating house’ module—one Riven found particularly appealing since he’s always wanted to work on large boats.

“When I graduate next year, I want to be a marine engineer,” he says. In the younger students, these impacts are equally pronounced. The inspiration is contagious.

“I like learning about maths and science,” says Dasheer, a year four student at Injinoo Primary with a shock of chestnut curls. “But I want to do what you guys do. It is so creative.” The coloured popsicle sticks from the afternoon’s bridge building workshop are still held tight in her right hand.

On the final evening of the regioneering tour, there are dozens of success stories; young girls eager to go to university down in Brisbane and the teachers asking Chelsea and Talia if next time they can come back for a week. But among all excitement, one story stands out as teacher Dianne puts her fifth grade class to work with an hour of creative writing.

“I expected them to write about the usual things we have been writing about,” she said. “But this is a sample of what was written.”

“When I grow up I want to go to University and become an engineer. Consequently, I’ll get a great job. I might go and help Africa and solve problems all over the world.”

For Talia, Chelsea and the EWB Regioneering team, the success is clear, and while their careers might be young, their impact is already great.  Their contributions help EWB act as a catalyst for sector-wide change by hosting and coordinating education and research to promote knowledge sharing, foster innovation and encourage greater social responsibility within the Australian engineering sector.