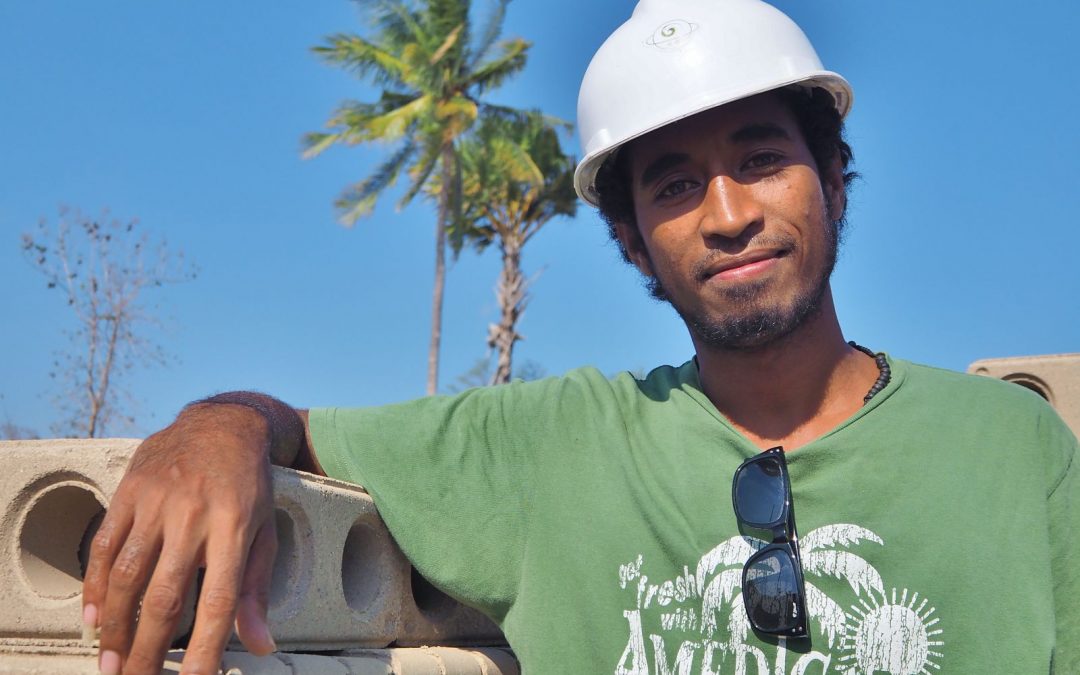 “I chose engineering, because I wanted  to contribute to the infrastructure development of my young country.”

Meet Lazio Miranda, a Production Engineer with Community Housing Limited (CHL). CHL is an NGO that provides long-term affordable housing and construction training for locals in Timor-Leste and is one of EWB’s partner organisations. Since the completion of his Civil Engineering degree in January, Lazio has been developing with EWB mentors and field professionals, sustainable housing options in Timor, turning Lazio  from graduate to leading humanitarian engineer.

This is his story.

Growing up in the tiny town of Nanafoe in Timor-Leste’s Lautem District, Lazio attended school during the Indonesian occupation finishing in 1999.  “School was very basic,” Lazio says, “we just studied how to know ABC and things like this… education was very low.”

As Timor-Leste’s struggle for independence from Indonesia occurred, Lazio’s schooling was heavily disrupted due to the destruction of infrastructure and unstable political conditions. Despite these setbacks, Lazio achieved his dream of moving to Dili to study Civil Engineering at the National University of Timor-Leste (UNTL).

“I chose engineering, especially civil engineering, because I wanted  to contribute to the infrastructure development of my young country.”  It was this here that led Lazio to his work experience role with CHL in January last year. Under the supervision of EWB Field Professional Hamish Banks, he began work as a Building Materials Research Engineer, helping CHL is its mission to deliver affordable housing to people in need.

Together, Lazio and Hamish researched the best methods for how to produce and then construct with compression-stabilised soil bricks using manually operated machinery. Their first big opportunity to put this research into practice came when CHL won a government contract to design and deliver 72 houses to help relocate a community in Suai.

As his EWB Australia mentor Hamish's final months in Timor-Leste began, he and  Lazio finalised best practice brick production and designed a large-scale production facility for the upcoming projects.

In late 2014, Lazio joined forces with new EWB Field Professional Jack Nugent to complete the design of the new brick production facility, overseeing much of the construction process. The following June, Lazio trained 60 local community members in skills he had learnt with EWB Field Professionals Hamish and Jack. These included skills in soil selection, brick production, efficient work systems and onsite Occupational Health & Safety.  Today the  facility  continues to run efficiently, with an output of roughly 35,000 bricks per week and all monitoring and management of the site and its 60 staff is now under the leadership of Lazio – an amazing achievement only two years after completing his degree!

So what’s next? Being highly motivated to develop his country in a sustainable manner, especially in his home district of Lautem Lazio plans to continue his education with further study, this time in Construction Management.

“I love engineering and I choose my career to be a professional engineer in the future. I would like to continue my bachelor’s degree to get a Master of Civil Engineering in another country.”

Luckily, Lazio’s time working with Engineers Without Borders Australia means he can now communicate in meetings using high-level English, a skill that sets him up well for a successful management career.

Once Lazio has achieved his dream of studying internationally, he would like to remain in Timor-Leste to work on infrastructure development and to pass on his knowledge so that the next generation of engineers is better equipped to sustainably develop Timor-Leste.

Thanks to his time at CHL and his collaborations with EWB Australia, he now has all the foundations for a successful career; technical, professional, language and soft skills. Through continued hard work and dedication, Lazio aims to become a respected leader in humanitarian engineering and inspire the next generation of Timorese engineers.