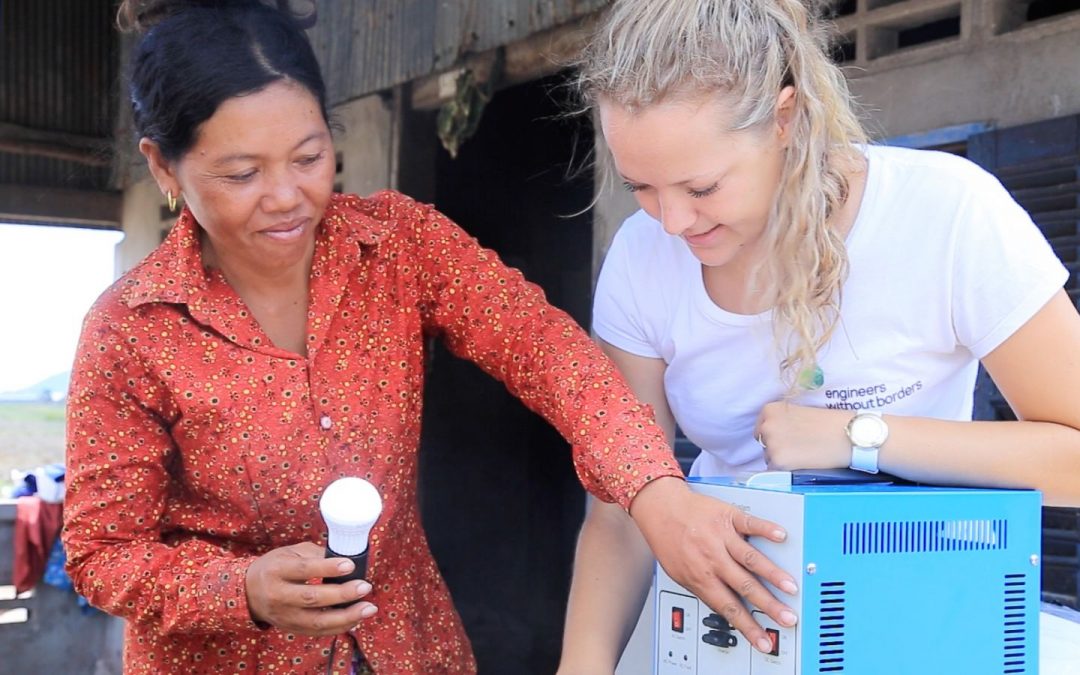 From Student to Field Professional: Becky Watts talks about her journey with EWB Australia

When ANU student Becky Watts first started her engineering degree, she never imagined she’d land her first job in a city more than 7000 kilometres across the world.

But the 24-year-old is no stranger to her soon-to-be new home – Phnom Penh – having already visited there twice this year. Since her first trip to Cambodia as an EWB Australia Design Summit student in January.

Becky recently spearheaded a school solar power project and is about to complete a thesis that she hopes will help more Cambodian schools switch to renewable energy. But she doesn’t want to stop there. In November, Becky will embark on a 20-month volunteer placement with EWB Australia – the culmination of a journey that she says started three years ago with a talk about none other than… toilets.

“In my first semester in engineering at Australian National University, I did the EWB Challenge and my lecturer Jeremy Smith gave us a bit of insight into composting toilets.” “It was a really interesting insight into engineering. Especially in first year when all the study is on introduction to electronics and introduction to mechanics, whereas this course was really practical.”

“So it was like, ‘how can you use that technical knowledge and technical physics and maths and turn that into a real life solution?’ So I think, that really got my attention.” Two years later, Becky stepped up to take part in EWB Australia’s first Design Summit in Phnom Penh. It was her first chance to develop ideas based on real, first-hand experiences in a developing country, and what Becky saw on that trip would change the course of her year ahead. “I saw something on the roof of a school and I was like, ‘what is that? In this community where there was no running water – where all the households don’t have any electricity, there was this solar panel.”

The solar panel Becky saw had been installed on a school roof in 2013, but had failed six months later due to a lack of maintenance training. As the solar panel sat there unused, locals continued to power their appliances with car batteries and create light with kerosene – putting their health and the environment at risk. The trip left Becky with a lot of questions – how did this initiative fail? How could this be prevented going forward? And it was these questions that were the inspiration for her final year thesis. Becky says she had always been interested in renewable energy but was particularly struck by the opportunity to help countries like Cambodia develop sustainably with renewable technology.

“Developing countries – they don’t have existing infrastructure, they don’t have the grid… so there’s a real opportunity here to satisfy the increasing electricity demand with renewable energy, because they don’t have the big coal plants or the big electricity network that we have. “Even off-grid areas like this they have the opportunity to use renewable energies, and it’s sunny, all year round, there’s huge opportunity there.” In June, with support from EWB Australia and local NGO BabyTree Projects, Becky returned to the village to help install two new solar panels and provide training to locals on how to look after the equipment.

Her experience has set her up well for her next big adventure to Cambodia in November, when Becky will start work as Project Facilitator for EWB Australia’s new Appropriate Technology initiative. In what will be her first role out of university, Becky will be looking at how technologies can be adapted to different environments, as well as encouraging knowledge sharing between sectors, such as the WASH (water, sanitation, hygiene) and energy sectors.

She will also have the chance to help build on the ideas generated by future design summits.

“My role is going to be seeing if we can get those designs and modify them or change them as the community wants and actually implement them. “It would be really cool for the students. There have been a couple of success stories from the design summits so far, but I would like to increase that.”