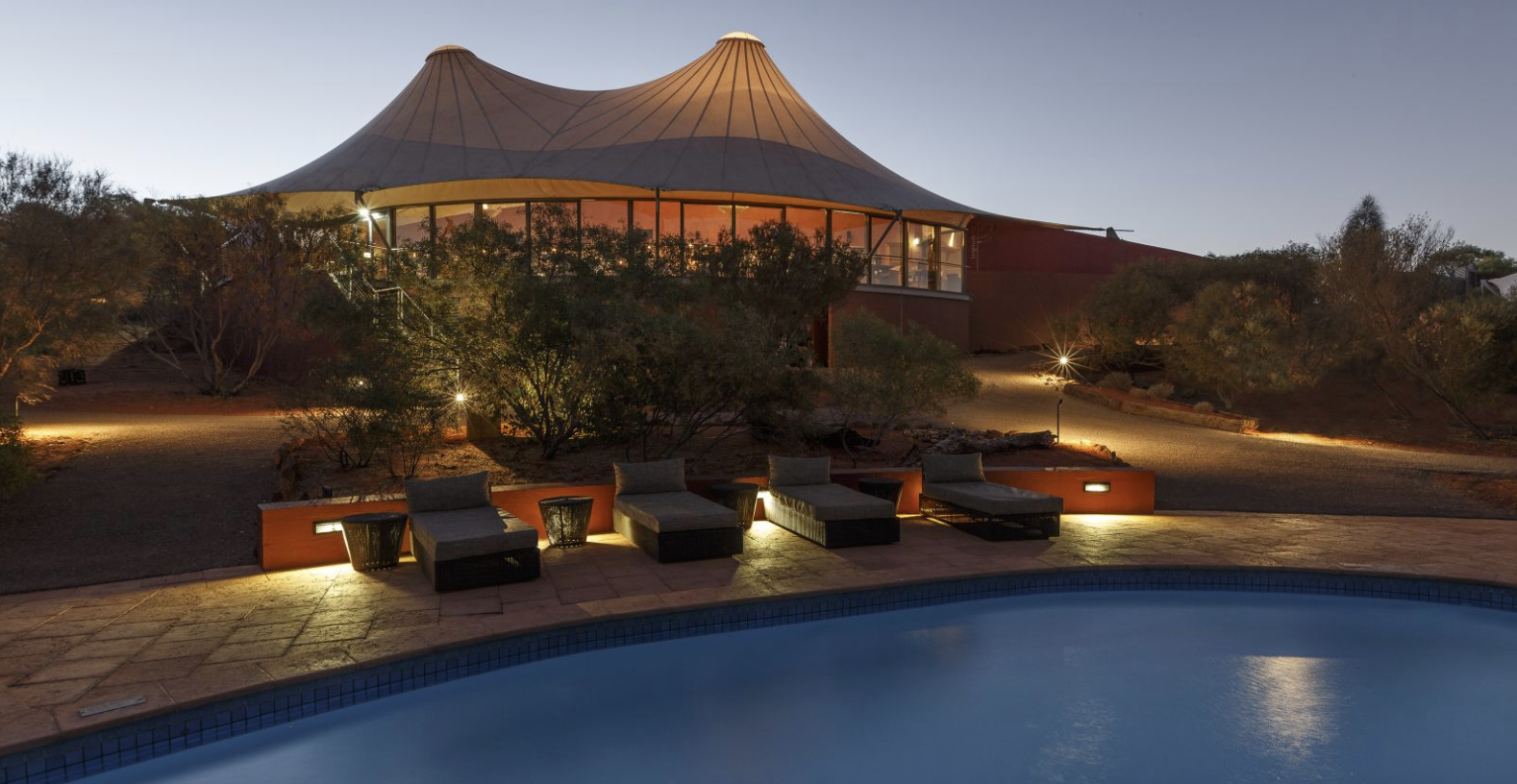 Longitude 131, Baillie Lodges’ exclusive resort near Uluru, was installing a new exterior sail – which formed the roof – to its main guest lounge and restaurant area, the Dune House. The company offered to donate the retiring sail, which was in good condition, to the local Mutitjulu Aboriginal community and arranged a specialty rigging crew and large crane to remove the canvas sail in one piece.

However, the sail had been custom-engineered to fit the shape of the Dune House building, making its relocation a challenge. Timely advice from structural engineers at Arup empowered the community to make an informed decision about whether to accept the donation and repurpose the sail to create a shelter at the Mutitjulu oval.

Karen Mangan, manager of the The Mutitjulu Foundation, which funds projects to benefit local Aboriginal communities, says “The Mutitjulu Community Aboriginal Corporation coordinator, Sid Moore, told me about it. We both thought it sounds great, but would it really suit their needs? We needed some expert advice and analysis about the feasibility and cost of reconstruction, how long it would last and maintenance costs.”

Karen reached out to EWB Connect, who quickly brokered access to expert advice from Arup. “The timing with the advice was crucial,” explains Karen, “Because if the sail was dropped off and it turned out to be not viable, it would have been at the community’s expense to dispose of a massive piece of fabric.”

Structural engineers at Arup conducted a desktop assessment using the original sail designs, and drew on the expertise of a colleague who is a tensile structures expert. Their investigations found that while the donation was very appealing, repurposing the sail was not viable as it would be a complex and expensive exercise.

The main issue was with only the sail being donated, the community would have to rebuild the supporting structure including columns, ties and foundations at considerable expense. Other factors such as the need to allow for different soil and wind conditions, and a question mark over how long the sail would last, also contributed to the finding. Based on Arup’s advice, the Mutitjulu community decided not to accept the donation.

The ability to access an internal expert and do a preliminary desktop analysis meant the Arup team, led by Marinna Keating, Structural Engineer, Buildings from Melbourne and Nicholas Werrett, Graduate Structural Engineer, from Perth, did not spend as much time on the project as they originally envisioned.

“It was a good lesson in how you can deliver a lot with not much,” says Nicholas. “You don’t get a sense day to day how much value you can bring. Even though there wasn’t much work in this, we managed to deliver an enormous amount of value to this community without even having to go into all the wiz bang analysis, which some of us got excited about the prospect of doing.”

Marinna also felt “We wanted to get our teeth stuck into it a bit more, but that’s not necessarily a bad thing, because we were able to provide what the community needed. Just being able to identify something from a very high level and being able to bring to the table what we understand about structure and what that may or may not mean was a really good lesson for us, as we learned there are different ways to add value.”

“It was great to see there are professionals and companies willing to give their time and expertise to small organisations and Aboriginal communities like Mutitjulu” says Karen.

“Providing that level of expertise without having to pay for it was an absolute godsend for the Mutitjulu community and the Foundation. We rely on donations from resort guests and staff, fundraising and matched donations from Voyages, so not having to spend money on something which didn’t eventuate means we can retain our assets and put them towards projects that are going to deliver benefits to the communities we represent.”

The project also enabled the participants to build their networks.

“It was really nice to make the new connections,” says Marinna. “We met Karen and Jacqui Bell from EWB. Out of that, I ended up being involved in another pro bono project straight after this one, because Jacqui needed a quick turnaround for some structural engineering, and was able to come to me directly. If Karen needs a hand with something in the future, she now knows a few of us who can help.”

Karen said the project reinforced her belief that “These things need to come from the community.”

At the time of writing, the Mutitjulu Community Aboriginal Corporation was getting an environmental impact assessment completed prior to building a shelter, toilets and a change room at the Mutitjulu oval.

“I’m looking at contacting EWB Connect to see if any member organisations would be interested in providing advice on designs for something that is purpose built and suitable for the environment and location, and the fact that it’s exposed to wind,” says Karen.